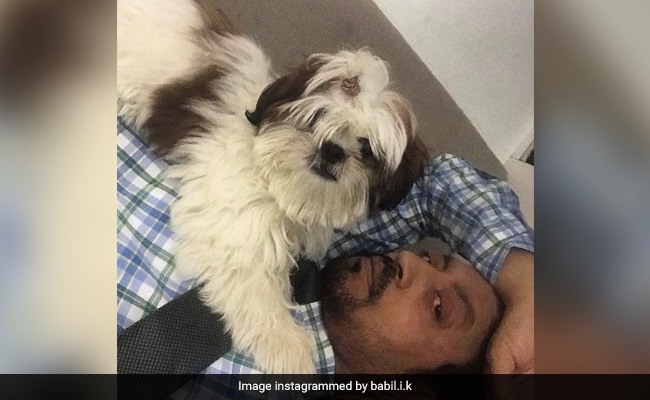 Irrfan Khan‘s son Babil, on Thursday, treated his Instafam to an adorable throwback picture of the late actor. The blast from the past features the actor chilling with a furry friend named Bassu on the sets of his 2018 film Blackmail. The photo, clicked in between Irrfan’s shooting breaks, shows the actor lying on what appears to be a couch and Bassu sitting on his chest. Sharing the picture, Babil wrote: “A sweet one for his fans. Bassu (Manpreet Bacchhar’s puppy) and Baba, Blackmail, 2017.” Babil often shares old pictures of his father and he lit up Instagram once again on Thursday with his latest post.

Blackmail, directed by Abhinay Deo, also featured Kirti Kulhari, Arunoday Singh and Divya Dutta. The film revolves around the story of a married man named Dev Kaushal (Irrfan Khan), who tries to blackmail his wife’s lover after he finds out about her extramarital affair.

Irrfan Khan died in a Mumbai hospital on April 29 at the age of 53 after a long battle with cancer.

Since then, his son Babil shares million-dollar pictures of the actor on his Instagram profile. In November, Babil wrote this heartfelt note for his father: “I still feel like you’ve gone for a long shoot, a long schedule underwater and you’ll come back to me, to the surface again.”

Posting a picture of parents Irrfan Khan and Sutapa Sikdar, Babil wrote: “It’s true, time does indeed slow down in the spaces between your breaths. And once you’ve dreamed of more, how could you settle for less. Perhaps, it was over because you knew. Or perhaps, because I grew. But the sky isn’t so blue, when the sun is setting over you.”

Irrfan Khan was one of the most-loved actors in Bollywood. He was best known for his performances in films like Haider, Maqbool, Paan Singh Tomar, Piku and The Lunchbox.