The speculation surrounding Bryan Danielson’s health and his immediate future is expected to be put to rest on tonight’s “Dynamite”. AEW announced Danielson will address Sunday’s Forbidden Door pay-per-view and the “Blood & Guts” match being promoted for next Wednesday.

Danielson has been out of action since the “Anarchy In The Arena” match at the Double Or Nothing pay-per-view on May 29. However, he has remained entwined in storylines leading up to Forbidden Door and “Blood & Guts”. New Japan Pro-Wrestling’s Zack Sabre Jr. publicly called out Danielson after NJPW’s “Dominion” event earlier this month. Sabre’s comments were acknowledged during last Friday’s AEW “Rampage”.

Meanwhile, one of Danielson’s cohorts in the Blackpool Combat Club, Jon Moxley, is set for action tonight. Just days before Moxley faces Hiroshi Tanahashi for the Interim AEW World Championship at Forbidden Door, the two men will team up to face Chris Jericho and Lance Archer.

The final participant in the four-way match at Forbidden Door for the inaugural AEW All-Atlantic Championship will be decided on tonight’s “Dynamite”. Malakai Black will face Penta Oscuro in the final qualifying match. The winner will join Miro, Pac, and Tomohiro Ishii in the title bout at Forbidden Door.

Will Ospreay is set to return to action on “Dynamite” tonight. He’ll tag with Aussie Open against Orange Cassidy and Roppongi Vice. Cassidy returned to AEW programming last Wednesday to confront Ospreay. Those two men are now set to meet one-on-one at Forbidden Door with Ospreay’s IWGP United States Championship on the line.

AEW is also promoting that we’ll hear from Christian Cage tonight. Cage turned on Jungle Boy at the end of last Wednesday’s “Dynamite” after Jungle Boy and Luchasaurus lost the AEW Tag Team Championship in a ladder match against The Young Bucks.

The following line-up is announced for tonight:

Stay tuned for more on tonight’s “Dynamite” and be sure to join us for live coverage at 8 PM ET. 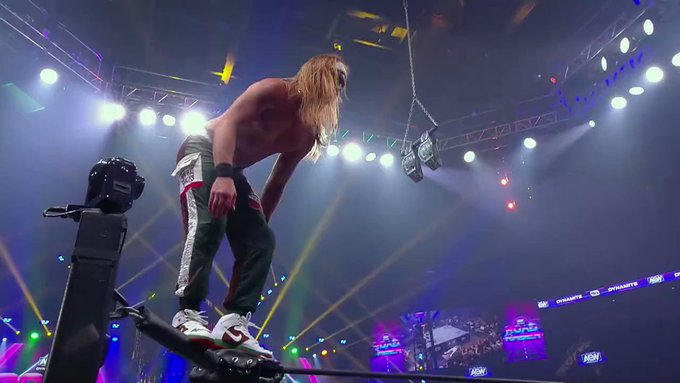