It was announced this weekend that Rosa will be returning to Tokyo Joshi Pro next month to go one-on-one against Miyu Yamashita at the “Summer Sun Princess” event. The show takes place on July 9 at the Ota City Ward Gymnasium in Tokyo.

This match was reported to be in the works earlier this week after Yamashita did well in streaming appearances during her recent excursion to the U.S. She wrestled twice for Prestige Wrestling in Portland, Oregon, where she defeated Impact’s Masha Slamovich on May 28 and her fellow TJPW star Maki Itoh on May 29. She would cap off her trip to the U.S. by appearing on “AEW Dark: Elevation” on June 1 where she teamed with Skye Blue in a losing effort against Nyla Rose and Serena Deeb.

As for Rosa, she has been unable to compete in Tokyo Joshi Pro since January 2020 due to the effects of the ongoing COVID-19 pandemic. In October 2020, she was forced to vacate the International Princess Championship that she had won at “New Year Dish Pro Wrestling” just as the pandemic had started.

Another indie star that has often appeared in AEW will be joining Rosa in competing at “Summer Sun Princess”, as Willow Nightingale is scheduled for a singles match against Miu Watanabe.

Miyu Yamashita has commented on her singles match against Thunder Rosa at SUMMER SUN PRINCESS’22 on July 9.
#tjpwSSP22
#tjpw https://t.co/t9vGrKrZZI 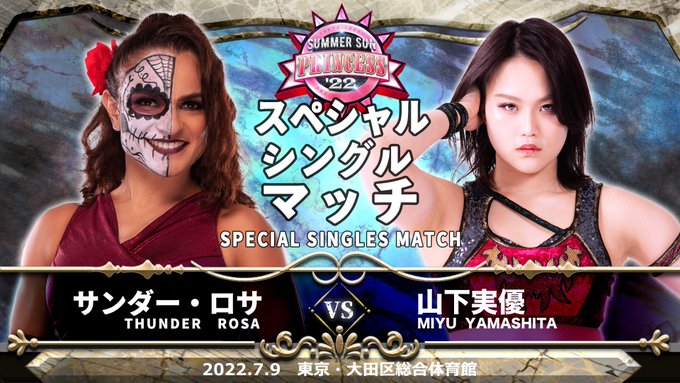