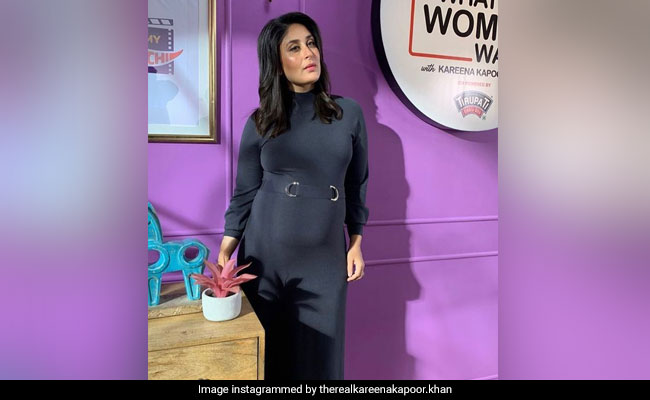 Kareena Kapoor on the sets of her show. (courtesy: therealkareenakapoor)

Pregnant Kareena Kapoor never misses a day at work. The actress, who announced her second pregnancy in August this year, has been working day in and day out. The 40-year-old actress recently shot for an episode of her talk show What Women Want Season 3, pictures from which were shared by several fan pages dedicated to the actress on social media. Kareena, for the shoot, picked a grey bodycon dress and she looked stunning as ever. We also got a glimpse of her baby bump. She was seen sporting wavy hair and minimal make-up. The pictures from Kareena’s day out at work are trending big time and so are her maternity looks.

Take a look at the pictures here:

Kareena Kapoor and her husband Saif Ali Khan shared the big news of their second pregnancy in August, this year. “We are very pleased to announce that we are expecting an addition to our family. Thank you to all our well-wishers for all their love and support,” the couple said in a joint statement. The couple got married in the year 2012 and welcomed their first child Taimur Ali Khan in 2016. Meanwhile, Kareena has actively been sharing posts from her maternity diaries on social media. See her posts here:

Kareena Kapoor finished the final schedule of her forthcoming film Laal Singh Chaddha, co-starring Aamir Khan during her pregnancy, which she announced in August this year. The actress also shot for a few episodes of What Women Want Season 3. She also posted pictures from several shoots that she took up. Kareena Kapoor was last seen in Angrezi Medium, co-starring late actor Irrfan Khan. Her line-up of films also includes Karan Johar’s period drama Takht, the shooting of which hasn’t started as of now.