President-elect Joe Biden is placing blame for the serious cyber hack of numerous federal government agencies and major companies on President Trump and pledged that “we will respond” when it’s determined which county is behind the damage.

Biden on Tuesday called the cyberattack “a grave risk and it continues. I’ve seen no evidence that it’s under control.” But he avoided answering whether he considers the attack an act of war.

HACKED NETWORKS WILL NEED TO BE BURNED ‘DOWN TO THE GROUND’

In a pre-holiday address and in an question and answer session from his hometown of Wilmington, Del., the president-elect took aim at Trump.

“The truth is this, the Trump administration failed to prioritize cybersecurity,” Biden argued. “It did that from eliminating or downgrading cyber coordinators in both the White House and at the State Department, to firing the director of Cyberspace [Cybersecurity] and Infrastructure Security Agency, to President Trump’s irrational downplaying of the seriousness of this attack. Enough’s enough.” 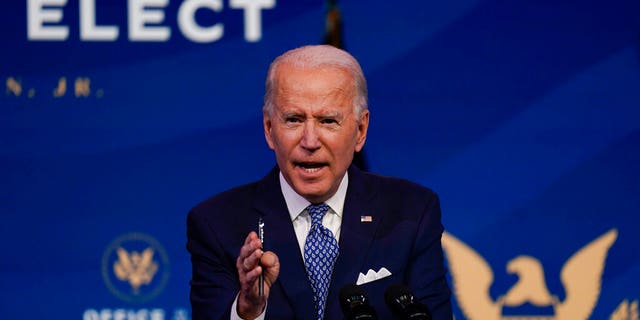 Biden highlighted that “the attackers succeeded in catching the federal government off guard and unprepared.”

“This assault happened on Donald Trump’s watch when he wasn’t watching. It’s still his responsibility as president to defend American interests for the next four weeks. But rest assured that even if he does not take it seriously, I will,” the president-elect vowed.

Biden said, “athere’s still so much that we don’t know, including the full scope of the breach or the extend of the damage it has caused. But we know this much, this attack constitutes grave risk to our national security.”

The president-elect emphasized that “we can’t let this go unanswered. That’s means making clear and publicly who is responsible for the attack and taking meaningful steps to hold them to account.”

Biden stressed that “the Trump administration needs to make an official attribution.”

“This was a very significant effort, and I think it’s the case that now we can say pretty clearly that it was the Russians that engaged in this activity,” Pompeo had said of the cyberhack in an interview Friday on the “Mark Levin Show.”

But on Saturday, the president contradicted Pompeo as he downplayed the attack.

“The Cyber Hack is far greater in the Fake News Media than in actuality. I have been fully briefed and everything is well under control,” Trump tweeted. And he added that “it may be China.”

The attack, which occurred over a period of several months starting earlier this year, zeroed in updates in widely used software from SolarWinds Corp., an Austin, Texas-based company.

Biden, answering reporter questions, said, “When I learn the extent of the damage and in fact who is formally responsible, they can be assured we will respond and probably respond in kind.”

“I promise you there will be response,” he repeated.

While he criticized Trump, Biden thanked members of Congress for speaking out immediately over the severity of the hack. The president elected said he was “pleased to see leaders in both parties in the Congress speak out loudly and clearly on this attack. … I want to thank prominent Republicans in the Senate particularly for speaking out.”