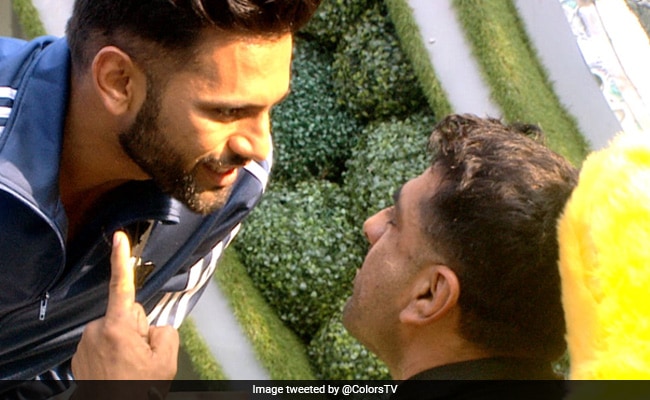 Bigg Boss 14: Rahul and Eijaz in the show. (courtesy: ColorsTV)

In tonight’s episode of the reality TV show Bigg Boss 14, Rahul Vaidya and Eijaz Khan got into an ugly fight. Though Rahul Vaidya wasn’t performing the captaincy task but Eijaz Khan was competing for this week’s captaincy. During the course of the game, Eijaz Khan called Rahul Vaidya a “coward” for running away. Rahul Vaidya had quit the show midway after he was feeling “homesick.” However, he recently returned to the house. Both the contestants have had their differences for quite some time. Rahul questioned Eijaz, while the actor accused him of quitting the show. During the course of the game, Rahul joined the game, which irked Eijaz Khan. Rahul Vaidya was asked to leave the task after Bigg Boss intervened and reminded him of his health condition.

The winner of the first leg of the game was Rakhi Sawant. The second contestant to win the captaincy task was Aly Goni. Jasmin Bhasin won the third round of the task. All three contestants will be competing for captaincy. In another segment of the show, Nikki Tamboli said that she has been feeling a bit low and that she is even thinking of leaving the game. Jasmin Bhasin and Abhinav Shukla told Nikki that she should stay strong.

Meanwhile, Arshi Khan fought with Rubina Dilaik throughout the course of the game. She accused Rubina of body shaming her and told Rubina that she is picking fights with the wrong person. Rubina kept ignoring Arshi and later walked away. This week Arshi Khan, Eijaz Khan, Manu Punjabi, Abhinav Shukla and Kashmera Shah are nominated for the elimination round of this week.

Watch this space for more updates of Bigg Boss 14.