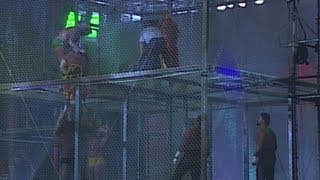 In the mid-90s, Brian Pillman started developing his “Loose Cannon” gimmick in which he was known for his unpredictable behavior. He used the gimmick in WCW, ECW and WWF, including working for all three promotions in the span of 18 months.

Dave Meltzer brought up Pillman when discussing the recent death of actor Tiny Lister, who was also Zeus in WWF and Z-Gangsta in WCW. Lister was part of a Doomsday Cage match at WCW Uncensored in 1996 when he and seven other heels, including Ric Flair, Arn Anderson, and the Dungeon of Doom, battled Hulk Hogan and Randy Savage in a three-story cage. However, WCW originally wanted nine heels to face Hogan and Savage, as Pillman was supposed to be the ninth heel but pulled out. Understandably, WCW wasn’t happy about that.

Meltzer explained how Pillman was able to get out of the match which would eventually win the Wrestling Observer Newsletter’s “award” for the Worst Match of the Year.

“Boy, do I remember this,” said Meltzer on Wrestling Observer Radio. “Brian Pillman on the phone with me almost every night trying to plot a way out of this thing because he was starting to get over and he knew Hogan wanted to leg drop him. As soon as he started getting a buzz, Hogan wanted to leg drop him. All of a sudden, they called him and they wanted him in this match.

“Brian had pops in his neck, and every couple of years, he needed to get surgery to get them removed. I guess I could say – because he’s dead now – it was elective surgery. He could do it at any time, and when he got the word that Hogan wanted him in this match to leg drop him, he went and had the surgery without telling anyone. Once he had the surgery, he couldn’t do a match that quick.”

Meltzer said that WCW was mad at Pillman that he couldn’t be a part of the match, but they didn’t know that it wasn’t a necessary surgery at that time.

“That was Brian Pillman trying to figure out his way because we were talking about that and were, ‘This is gonna be the worst match of all-time.’ And it was actually worse than we thought,” said Meltzer. “It had Zeus in it and Jeep Swenson [The Ultimate Solution] in it. And the idea of two guys against nine guys, and knowing the two guys were gonna win, just kills everyone.

“How Ric Flair ever survived this, I have — I guess because he’s Ric Flair.”

If you use any of the quotes in this article, please credit Wrestling Observer Radio with a h/t to Wrestling Inc. for the transcription.