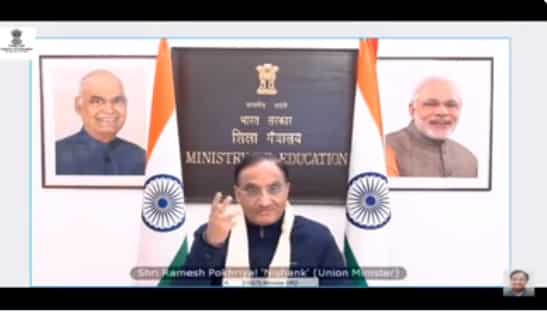 CBSE datesheet 2021: Union education Minister Ramesh Pokhriyal Nishank, in his interaction with teachers on social media, had a number of things to say that were helpful for students, parents and teachers and all the other stakeholders but importantly, he did not do one critical thing. That thing was the announcement of CBSE Board Exam 2021 dates of class 10 and class 12 exams. Yes, the minister did not announce any datesheet or schedule for class 10 and class 12 students.

Union Minister Ramesh Pokhriyal Nishank had gone live on Twitter to discuss about upcoming CBSE exams 2021 with teachers.  All eyes were on the Education minister, as students, their parents and teachers were expecting him to announce datesheet.  Students are getting increasingly anxious as the month of December is drawing to an end with no clarity on dates yet. Usually these are announced much earlier, but given the uncertainties due to pandemic, neither the CBSE nor the Ministry of Education have confirmed dates.

Significantly, minister said the CBSE board exams 2021 will not be held in January and February and any decision on the same will be taken later and exams will be held when situation is favourable post February.

What Minister Said On Teachers

Talking about training teachers online in times like these, he said it is a critical job yet CBSE has trained 4.8 lakh teachers in online training.

Here is the full video:

Answering about a question concerning why exams cannot be conducted online when classes were conducted digitally,” he said, “it is a big exercise and students need a laptop and internet connectivity at least for making the exam successful. Unfortunately, a small percentage of students do not have them currently. we can explore feasibility about the same in near future”

On Reaching Out To Students

He also emphasized on reaching out to students in remote areas and said in areas where there is no internet, teachers are teaching students through loudspeakers. “We understand the problems and efforts are on to bridge that gap in education,” he said.

Earlier, after several social media posts went viral claiming the CBSE Class 10, 12 board exams 2021 will be held in March, CBSE released a clarification stating that it is yet to finalise the CBSE Class 10, 12 Board Exams 2021. It has said any decision regarding dates will be taken after consulting all the stakeholders of the CBSE.