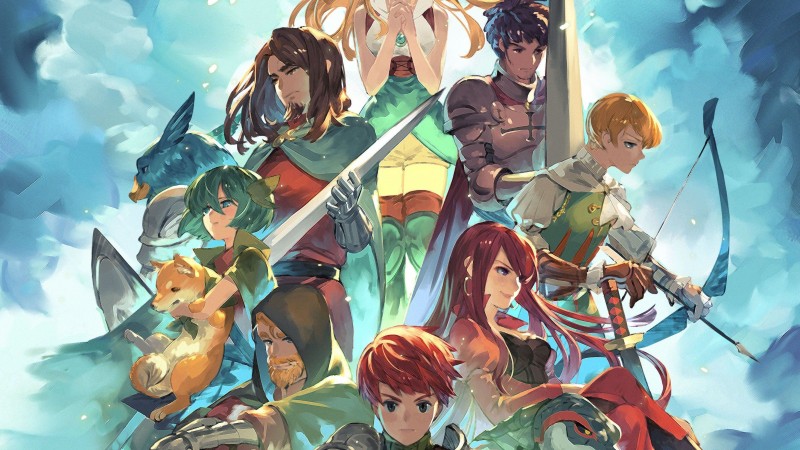 Chained Echoes deceives at first glance, making you question if you missed it back when its seeming contemporaries, like Final Fantasy VI and Chrono Trigger, were making a big splash. Of course, the reality is this lavish and imaginative RPG is brand new, crafted mostly by a single developer as both an homage to and celebration of those old games, even while injecting a healthy dose of new concepts. The resulting adventure may look like something from 30 years ago, but it plays with a sophistication that deserves attention from any genre fan.

The developer delights in playing with your preconceived ideas. Sometimes, it’s fulfilling those expectations at precisely the pace and moment you are most ready for them, in both story and gameplay, and at other times it’s about subverting them. Ready for a new twist on combat? Here’s a new additional system in which you control mechs in a fascinating alternate combat style, recalling classics like Xenogears. Think you understand the arc of the fated hero storyline? Maybe things are more complicated than you first guessed.

Along the way, the staples of classic JRPG-style adventuring appear in a balanced and rewarding loop. The thoughtfully designed combat system scales back on grindy, repetitive battles. Instead, every fight demands your full attention, leveraging enemy weaknesses, character abilities, on-the-fly party formation changes, and a unique overdrive mechanic to keep your party in the sweet spot of damage dealing. The party fully heals between combat, so it’s always about throwing everything you have at the enemy. Even regular fights sometimes come down to only having one hero standing to strike the final blow. I found the high challenge enjoyable, especially since bad decisions and a game over led to an immediate choice to replay the battle, so the penalty for failure is negligible.

The upgrade, gear, and leveling systems are all engaging and filled with compelling decisions. Wearing a class emblem can enrich your chosen skills for each character, letting you specialize each hero in powerful ways. Weapons and armor can be improved and tweaked with gems that apply new bonuses, encouraging players to spend time in the menus playing the optimization game. There’s even a fun “Reward Board” that offers precious materials and leveling options for completing specific tasks around the world, encouraging extensive exploration and discovery.

While playing within the established constraints of the genre, Chained Echoes also tells a mature and nuanced story, touching on themes of fate and free will, recovery from trauma, and the weight of guilt. Those and other tropes have plenty of room for exploration across dozens of hours of available stories and sidequests. Thankfully, it’s an enjoyable fantasy world, filled with unusual species and monsters, intriguing biomes, and a complex geopolitical structure. At times, that last component of political elements can become overwhelming and hard to follow and distracts from the more compelling character drama. But give Chained Echoes enough time, and everything begins to make sense.

A beautiful throwback musical score is accompanied by pixel-style visuals that relay nostalgia without being a game you’ve played before. Even so, the scope of the narrative and maturity of the character interactions sometimes feels at odds with the retro aesthetic. That incongruity can be a plus, emphasizing moments of terror, war crimes, or betrayals. But at certain dramatic moments, the visual constraints hold the narrative back.

While Chained Echoes has the advantage of decades of distance from the games it looks to for inspiration, it’s a better experience in many instances than those vaunted games from which it arose. I prefer this combat, storytelling, and approach to progression and exploration to many of the JRPGs I grew up so enamored with playing. That’s the highest praise I can heap on a game so removed in time from the games to which it might be compared. Whether you currently count yourself a JRPG connoisseur or fondly recall the ʼ90s heyday of the genre, Chained Echoes is well worth your time.