However, senior Trump administration officials on Thursday downplayed the risk of delays, citing a confusion over semantics, while Pfizer said its production levels have not changed.

Meanwhile, Pfizer dismissed any issues in production and distribution in a statement. 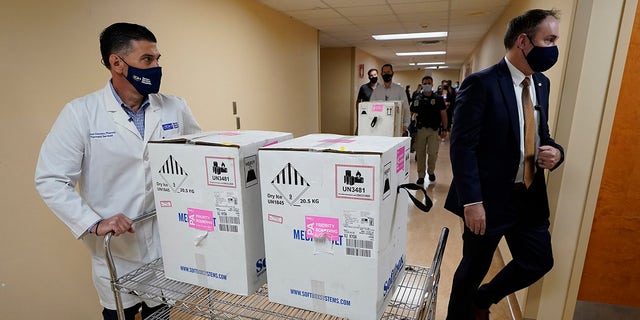 “Pfizer is not having any production issues with our COVID-19 vaccine, and no shipments containing the vaccine are on hold or delayed,” reads the statement. “This week, we successfully shipped all 2.9 million doses that we were asked to ship by the U.S. Government to the locations specified by them.”

“We have millions more doses sitting in our warehouse but, as of now, we have not received any shipment instructions for additional doses,” the statement continues.

In recent days, governors and health leaders in more than a dozen states have said the federal government has told them that next week’s shipment of the Pfizer-BioNTech vaccine will be less than originally projected.

Washington Gov. Jay Inslee took to Twitter Thursday, writing that the state’s share of doses was cut by 40% next week. He added that no explanation was given.

“This is disruptive and frustrating. We need accurate, predictable numbers to plan and ensure on-the-ground success,” he tweeted.

California, where an explosion in cases is straining intensive care units to the breaking point, will receive 160,000 fewer vaccine doses than state officials had anticipated next week — a roughly 40% reduction. California officials have been told to expect 233,000 doses.

The state reported more than 52,000 new daily infections on Thursday, according to the most recent figures from the state health department.

Two senior Trump administration officials spoke on condition of anonymity to the Associated Press and said initial numbers of available doses that were provided to states were projections based on information from the manufacturers, not fixed allocations.

Another change involved spacing out delivery of weekly shipments to allow for more manageable distribution. 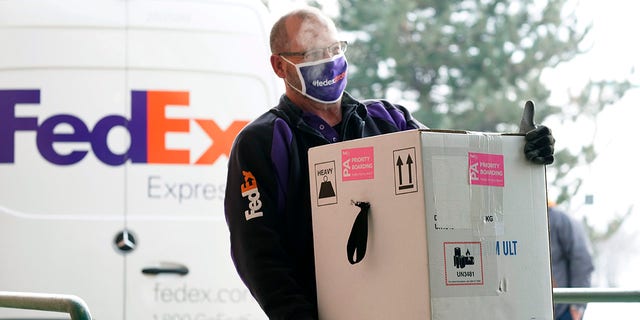 A FedEx driver carries a box to Colorado Gov. Jared Polis so he can sign for the delivery of the state’s first shipment of COVID-19 vaccine at the Colorado Department of Public Health and Environment, early Monday, Dec. 14, 2020, in Denver. (AP Photo/David Zalubowski)

“They will get their weekly allocation, it just won’t come to them on one day,” one official said.

While Pfizer agreed to provide over 6 million doses in the first week following federal regulatory approval, Operation Warp Speed only planned to roll out 2.9 million jabs right away. Another 2.9 million were to be held at Pfizer’s warehouse to guarantee that individuals vaccinated the first week would be able to get their second shot later to make protection fully effective.

Pfizer said it remains confident in its ability to deliver 50 million doses worldwide this year and up to 1.3 billion doses in 2021.