The Diablo Immortal Alpha is finally here. How does it live up to expectations? It’s been quite some time since its meme-tinged reveal at Blizzcon years ago, and the free-to-play mobile Diablo game is out in the wild for a select group of testers. I had a chance to go hands on and slaughter skeletons, spiders, and cultists by the hundreds. Let me be upfront with initial impressions – it plays well, looks good, and leans in hard on the core principles that make Diablo games great. That said, it makes me wish I could play it on another platform without having to resort to Android emulation, as I simply don’t enjoy gaming on my phone for extended periods of time and I loathe virtual controls. Let’s dive in.

Diablo Immortal takes place in the sweet spot between Diablo II and Diablo III chronologically. This means that a lot of cool characters are still around and in play to interact with. In this alpha, the Barbarian, Wizard, Monk, and Demon Hunter were available for play. I went with a class I’ve played a ton of in Diablo II and III, the Barbarian. The Crusader and Necromancer are slated to join the cast on launch. Many of my signature abilities like spinning around in a whirlwind or smashing things with big blunt objects are there intact, and there are even some mobility tactics to deal with when dodging telegraphed enemy attacks. However, again, playing it on my phone (A Google Pixel 4XL) made for a less precise experience than controlling my characters via WASD on Bluestacks emulation. The game looks really, really good “for a phone game” and there’s a load of voice-acting to go along with the rich effects. You get that sweet Diablo feel of punching through a pack of monsters, crushing elite enemies and bosses, and watching their bouncing bodies burst forth with a flow of gold and loot. There are even new random quests that can pop up when you’re in an area. These events are not complicated, but let you take on new challenges for additional rewards even when crossing familiar ground or exploring for bosses and chests.

The first time I saw Diablo Immortal several years ago, I was not impressed. It looked like almost any other generic dungeon-crawler that you could accidentally download off the app store, usually games that just keep rolling out sequels and ways to siphon people’s paychecks for big boosts. However, the alpha build that’s out there now looks, feels, and plays much closer to a core Diablo title, with some simplification in place for the mobile platform. Here’s something they got really right – activities. They’ve basically encapsulated the Diablo II “run” where you would go farm a boss through a level and turned them into mini-dungeons with several bosses and other challenges before taking on the primary antagonist. 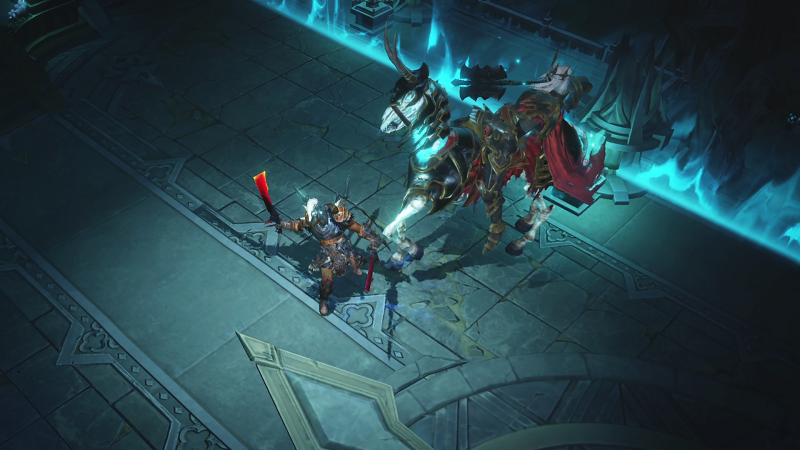 You can run these dungeons to your heart’s delight with no stamina bar or restrictions. The first thing I did after knocking out King Leoric was queue up and go at him again. It’s the first dungeon activity you unlock, and the mini-dungeon contains two cool bosses and the big guy himself, who is very similar to his Diablo III incarnation, but he has a horse now. That’s pretty cool. Even cooler is the activities all have certain rewards to chase, so you might go after Leoric one day if you’re after a pair of pants or the Countess another if you want some crafting materials, as they change bonus rewards. These dungeons are tuned to be snack-size in length and are scaled to handle alone or with friends, though they’re tuned for a group of players and not soloists on “Hell II” difficulty, which I haven’t yet had a chance to explore. Groups in Diablo Immortal can field up to 4 players.

In addition to these activities, rifts are back from Diablo III, with new options. Using crests, players can stack up modifiers for Elder Rifts to amp up the challenge – and the rewards. Elder Rifts can yield both runes and legendary gems.

Smashing through enemies is satisfying and you get that wonderful slot-machine feeling as you ramp up your gear, salvage your junk, and upgrade your high-power items. When you change out a slot (like a primary weapon) and you’ve sunk some upgrades into it, that can feel bad. Diablo Immortal lets you keep your upgrades tied to the slot when you change it out if you want, so you don’t need to feel bad about getting a hot new breastplate or a fresh axe. The paragon system returns, offering a smorgasbord of boosts after level cap (which is 45 in the technical alpha). These paragon trees let you focus on survival, treasure hunting, damage, and PvP. Yep, there’s PvP. I haven’t had a chance to engage in any PvP yet, but it’s back! Blizzard plans to add additional paragon trees to the game as time passes.

So, Diablo Immortal is free-to-play. In this technical alpha, it’s not easy to determine just how much that will impact gameplay, but the plan is monetization via a battle pass, crest/reforge stone sales, and more. It’s important to relay that you can’t buy gear. It’s also important to let people know that Diablo Immortal is more of a MMO than its predecessors, where you can see and battle with random folks all over the world during your adventures. Guess what? You can also trade with them anonymously over a tool called The Market. What can you trade in the market? Legendary gems, materials, and supplementary items. How exactly this is implemented is not something I’ve had a chance to test yet, but I’m hopeful that with the focus on account-bound items and gear that it’s nothing egregious.

I’m aware that for some, Diablo on the go is going to be an awesome thing, and I’ve thoroughly enjoyed my experience with the technical alpha so far. It’s a much better experience and game than what has been previously shown, so it’s clear a lot of renovation and care has been spent getting it to a new place. I almost sort of have to acknowledge this existence of what appears to be a quite competent mobile Diablo begrudgingly, since the biggest takeaway from tapping on my cooldowns and watching loot flip out of flopping demon corpses is that I wish I could play it on a standard platform rather than hunching over my phone and clumsily mucking about with virtual controls and big chonky touch buttons.

I’m hoping that Diablo IV will scratch that itch, but with that likely far in the future, I guess I’ll hunker down and whack away at some ghouls on my mobile device. I’m hoping that Android emulation alternatives give players an option to play effectively and efficiently on a PC, but we’ll see how things go. While there’s no word on a release date yet, the “alpha” battle pass is scheduled to expire in around 40 days, so I wouldn’t be surprised to hear more about a beta or release in the near future.