Environmental groups have continued to advocate and protest for extreme policies to combat climate change even amid a global energy crisis.

Organizations — including the Sierra Club, Greenpeace, the Sunrise Movement and the League of Conservation Voters — have doubled down on pushing the Green New Deal, divestment from fossil fuel projects and banning oil and gas production. High energy prices and fuel supply shortfalls, triggered largely by Russia’s invasion of Ukraine, though, are threatening the livelihoods of millions worldwide.

“Concerns about energy shortages in Europe and the spiking fossil fuel costs Americans are experiencing are both symptoms of our continued reliance on fossil fuels,” Kelly Sheehan, the senior director of energy campaigns at the Sierra Club, told Fox News Digital in a statement. “As long as we rely on volatile global commodities like oil and gas, we’ll always be vulnerable to geopolitics and the whims of greedy fossil fuel executives.”

“The current situation only underscores the need to make as rapid a transition to a clean energy economy as possible by making bold investments in clean energy and energy efficiency, not doubling down on the same risky fossil fuels that got us into the mess we’re in now,” she continued. 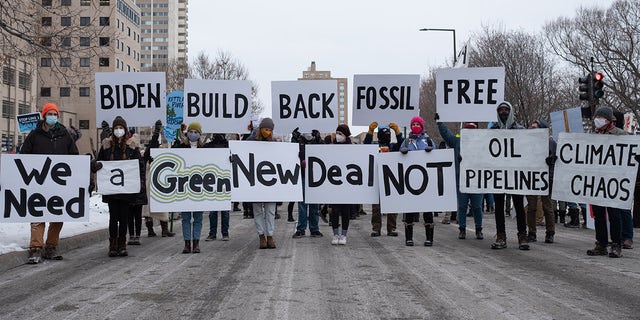 In the U.S., the average price of gasoline and diesel fuel hit record highs this month while high natural gas prices are expected to push electricity prices higher this summer. European countries, meanwhile, have been forced to increase coal reliance as a result of Russia’s control of the continent’s natural gas supply.

The price and supply instability has led to renewed calls from the fossil fuel industry, Republican lawmakers and some Democrats for more domestic oil and gas production.

US IS ON ‘CUSP OF RECESSION’ IF NOT ALREADY THERE, OIL ANALYST WARNS

But the Sierra Club has continued to advocate for the end of coal power and for blocking oil and gas project development. It also has argued for banks to divest from fossil fuel projects and for the federal government to halt leasing public lands to oil companies.

“Public lands and waters should never be threatened by oil and gas drilling,” the group states on its website. “We work to protect these special places from legislative assaults and federal regulatory rollbacks that threaten to open them up to exploitation by the fossil fuel industry.”

Greenpeace has made similar arguments in the U.S. and across the world, pushing for immediate curbs to fossil fuel use and divestment.

Activists with Greenpeace scaled a building at the Cannes Lions Festival of Creativity, a major global conference of creative marketing firms, in France in June to protest fossil fuel advertisements and sponsorships. The group is one of dozens to sign a petition filed with the European Commission to similarly argue in favor of a ban on fossil fuel ads.

“Europe is buzzing with how to increase oil and fossil gas production while the ground is literally burning under our feet,” Greenpeace European Unit Campaigner Silvia Pastorelli said during the protest.

The Sunrise Movement, meanwhile, has continued to push lawmakers to pass the Green New Deal, a climate package backed by progressives in the House and Senate that would cost taxpayers tens of trillions of dollars, over the course of a decade according to the American Action Forum. The environmental group doubled down on the legislation amid the Ukraine crisis, issuing the “Green New Deal pledge” for lawmakers to sign.

“As fossil fuel corporations destroy our communities and profit off of working families at the gas pump, our government has yet to pass climate legislation that meets the moment of crisis,” Sunrise Movement Executive Director Varshini Prakash said in March. “And yet, support for the Green New Deal has never been greater.”

In May, the Sunrise Movement attempted to help unseat Rep. Henry Cuellar, D-Texas, who has taken a softer stance on oil and gas development compared to most of his fellow Democrats. Prakash said Cuellar was “fundamentally misaligned” with the Democratic Party’s values.

The League of Conservation Voters (LCV) has called for a complete ban on offshore drilling, advocated for policymakers to ensure more than 80% of fossil fuels are left unburned and pushed for Congress to pass sweeping, big-spending climate legislation via reconciliation, a process that allows passage with a simple majority.

The LCV also released its annual “national environmental scorecard” in March ranking the climate voting records of federal lawmakers. The report downgraded lawmakers who voted for more fossil fuel drilling and for the Keystone XL pipeline.

Greenpeace, the Sunrise Movement and the LCV didn’t respond to requests for comment from Fox News Digital.

Thomas Catenacci is a politics writer at Fox News Digital