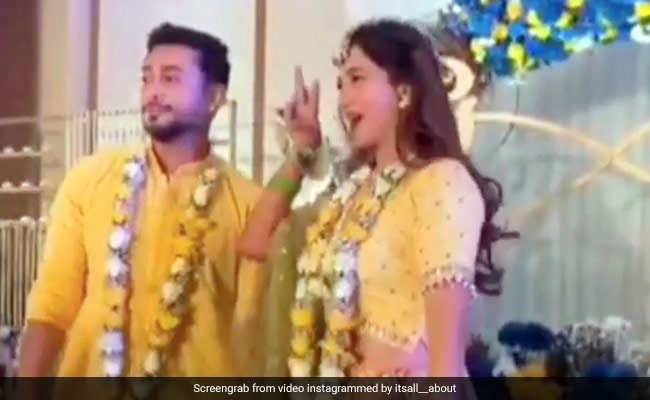 Zaid and Gauahar in a still from the video. (courtesy: itsall__about)

TV star Gauahar Khan, who is all set to marry fiancé Zaid Darbar on December 25 in Mumbai, gave us a glimpse of her pre-wedding festivities, which began on Monday. Several fan pages dedicated to the actress shared videos of the couple dancing at their pre-wedding festivities. Gauahar Khan and Zaid Darbar, who were seen twinning in yellow outfits, were seen dancing with all their hearts at their entries as well as on the stage. The bride-to-be picked a yellow lehenga designed by Maayera Jaipur , while Zaid Darbar accessorised his yellow kurta with tinted glasses. We also got a glimpse of veteran singer-composer and Zaid’s father Ismail Darbar dancing in the video.

Check out the videos here:

Sharing a picture from the ceremony, Gauahar  wrote: “When half of me met half of you and together the better halves shaped our beautiful moments. #Alhamdulillah. Day 1 of #GaZa celebrations – Chiksa.”

Gauahar and Zaid, who have been dating for some time, announced their wedding date in an Instagram post. “This year 2020 has been anything but ordinary, and our love story through it all has been nothing short of extraordinary. It gives us immense joy to announce that we are tying the knot and embarking on a journey of forever! Keeping the current scenario in mind, we will be celebrating the big day with our family in an intimate ceremony,” read an excerpt from the post.

Gauahar Khan, a former model, famously featured on the show The Khan Sisters, which showcased the lives of her and her sister Nigaar. Gauahar Khan has also featured in films such as Rocket Singh, Game and Ishaqzaade. She participated in reality TV shows such as Jhalak Dikhhla Jaa 3, Bigg Boss 7 and Fear Factor: Khatron Ke Khiladi 5. She recently featured as one of the seniors in Bigg Boss 14. Zaid Darbar is a choreographer.