AEW has announced the full lineup for Friday’s edition of “AEW Rampage” on TNT, which would be the go-home show before Sunday’s Forbidden Door pay-per-view event.

In the lead-up to their “Winner Takes All” match for the ROH & IWGP World Tag Team Titles on Sunday, Cash Wheeler of FTR will go one-on-one against United Empire’s Jeff Cobb.

AEW has also announced a singles bout between Andrade El Idolo and Rey Fenix, neither of whom will be wrestling at Forbidden Door due to contractual issues. As reported earlier, Andrade, Fenix and Penta Oscuro won’t compete Sunday in Chicago because Mexican wrestlers who previously worked for AAA are barred from the crossover show due to New Japan’s partnership with CMLL.

In a recent interview with Lucha Libre Online, Andrade revealed he was originally scheduled to wrestle Will Ospreay at the event until Orange Cassidy was picked as his replacement.

“My problem is not with AEW, because they had an idea for me to face Will Ospreay,” Andrade revealed. “The idea was to face him for the IWGP United States Championship.”

Meanwhile, HOOK will be facing The DKC, and Serena Deeb & ROH Women’s Champion Mercedes Martinez will be seen in action in a tag team bout. Their opponents haven’t been named yet.

The full lineup for Friday’s “AEW Rampage” can be found below. 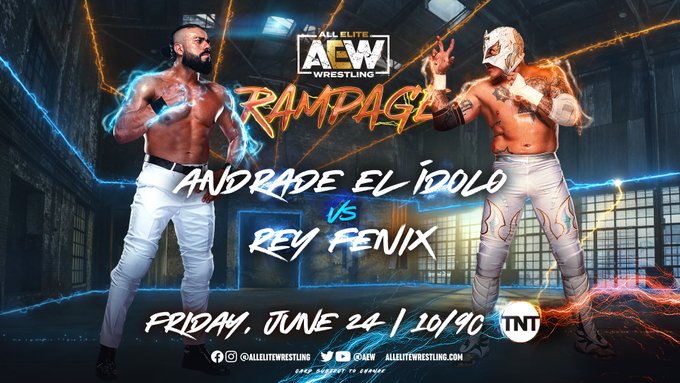