In the photo she tweeted Saturday, Melania Trump is wearing a black pantsuit and white blouse that matches the president’s black suit and white dress shirt — a different look from the first lady, who has traditionally opted for dresses during the holidays.

Melania Trump did, however, wear a similar pantsuit when former first lady Laura Bush visited the White House during the holidays in 2018. 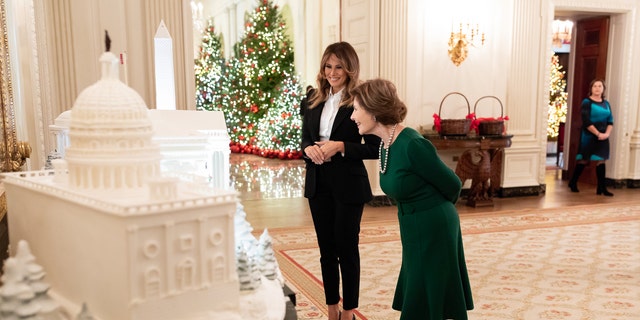 In her official 2018 Christmas portrait, the first lady opted for a white dress, and in 2017, she wore a black dress with beading across the front for the photo. Old tweets sharing the official 2018 and 2017 photos included the same “Merry Christmas” message she wrote this year.

MELANIA TRUMP HAS BEEN TREATED FAR WORSE BY MEDIA THAN ANY FIRST LADY IN MODERN HISTORY: CONCHA

This year’s Christmas decor theme at the White House is “America the Beautiful.” Former President John Kennedy is featured on the 2020 official White House Christmas ornament, which are sold each year to raise money for the White House Historical Association.