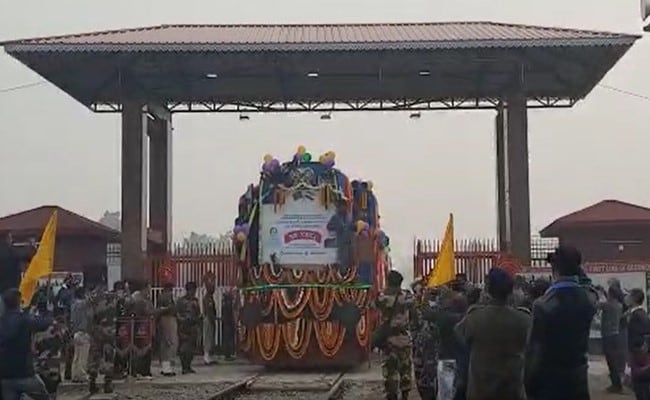 Chilahati in Bangladesh: The Haldibari-Chilahati link will boost economic activity in the region

India-Bangladesh Railway Line: In a significant step to boost railway connectivity between India and Bangladesh, Prime Minister Narendra Modi and Bangladesh Prime Minister Sheikh Hasina jointly inaugurated a railway link between Haldibari in India and Chilahati in Bangladesh during the India-Bangladesh virtual bilateral summit on Thursday, December 17. With the new Haldibari-Chilahati rail link, the total number of railway lines between the two countries has increased to five. A goods train was flagged off by Md. Nurul Islam Sujan, Railway Minister of Bangladesh, from the Chilahati station which entered India passing through the international border, embarking the new connectivity between the two neighboring countries.

According to the Indian Railways Northeast Frontier Railway (NFR) zone, after partition in 1947, seven railway lines were operational between India and the then East Pakistan up to 1965.  Presently, there are four rail links that are actively operational between India and Bangladesh, namely, Petrapole – Benapole, Gede – Darshana, Singhabad -Rohanpur, and Radhikapur – Birol. The newly inaugurated Haldibari – Chilahati rail link has become the fifth operational railway link between the two countries.

After 5️⃣5️⃣ years of getting cut off, Prime Ministers of India and Bangladesh today inaugurated rail link between Haldibari(India) & Chilahati(Bangladesh) @RailMinIndia
@PIBKolkata@PIB_Guwahati This will strengthen bonds between people of both nations, and enhance travel & trade pic.twitter.com/toq2PX69XU

In 2016-17, the Railway Board had sanctioned the construction of a new broad-gauge (BG) line of length 3.50 km from the Haldibari station to the Bangladesh border for connecting to Chilahati in Bangladesh in order to reopen the rail link.

Indian Railway authorities have restored the tracks up to the international border from the Haldibari station at a cost of Rs. 82.72 crores. Bangladesh Railways has undertaken the redevelopment and laying of missing tracks on their side from the Chilahati station to the international border. On the Bangladesh side of the rail link, the Chilahati – Parbatipur – Santahar – Darshana existing line is already functioning in broad gauge.