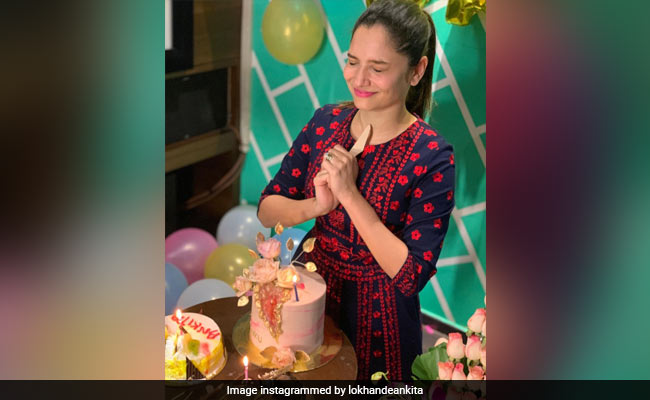 A very happy birthday, Ankita Lokhande! The actress turned 36 on Saturday and no points for guessing that she celebrated her special day with her boyfriend Vicky Jain. Ankita, who is best-known for her performance in television show Pavitra Rishta, shared glimpses of her birthday celebrations on Instagram early Saturday. In the video she posted, the actress can be seen cutting her birthday cake in the presence of Vicky Jain, her family and some close friends. Ankita Lokhande looks gorgeous in a blue dress with flower embroidery on it. Sharing the video, the actress wrote: “Birthday special. Happy birthday.” For pictures, her caption read: “Wishes and dreams.”

Last month, the actress treated her fans to an adorable video of herself and Vicky Jain dancing together. They can be seen twinning in white outfits in the clip. Check it out here:

In terms of work, other than Pavitra Rishta, Ankita Lokhande has also worked in TV shows such as Ek Thhi Naayka and Shakti – Astitva Ke Ehsaas Ki. The actress made her Bollywood debut with Kangana Ranaut’s 2019 period-drama Manikarnika: The Queen of Jhansi. Her last Hindi film was Baaghi 3, which starred tiger Shroff in the titular role. Ankita Lokhande has also participated in reality shows like Jhalak Dikhhla Jaa and Comedy Circus.