Congress leader Jairam Ramesh has tendered an apology to National Security Advisor (NSA) Ajit Doval’s son Vivek Doval in a criminal defamation case. The matter concerned a matter in 2019 when Ramesh had made some remarks against Vivek Doval during a press conference allegedly after drawing conclusions from an article published in Caravan magazine. Vivek Doval had thereafter, filed a criminal defamation case against Ramesh and Caravan magazine Editor-in-Chief Paresh Nath and reporter Kaushal Shroff for damaging his reputation.

In his apology letter to Vivek Doval, Ramesh wrote, “I had conducted a press conference on 17 January 2019 making certain statements about you, your family and your business venture GNY Asia Fund. I understand these statements have hurt you deeply. I want to clarify that these statements or accusations, were made drawing conclusions from an Article that was published the previous day in the Caravan magazine. As the case progressed, I realized that perhaps some independent verification may have been in order.”.

Ramesh further said, “The General Elections were close, and the questions raised in the article seemed appropriate for being highlighted in public. In retrospect, I may have gone overboard in making certain insinuations against you and your family.” 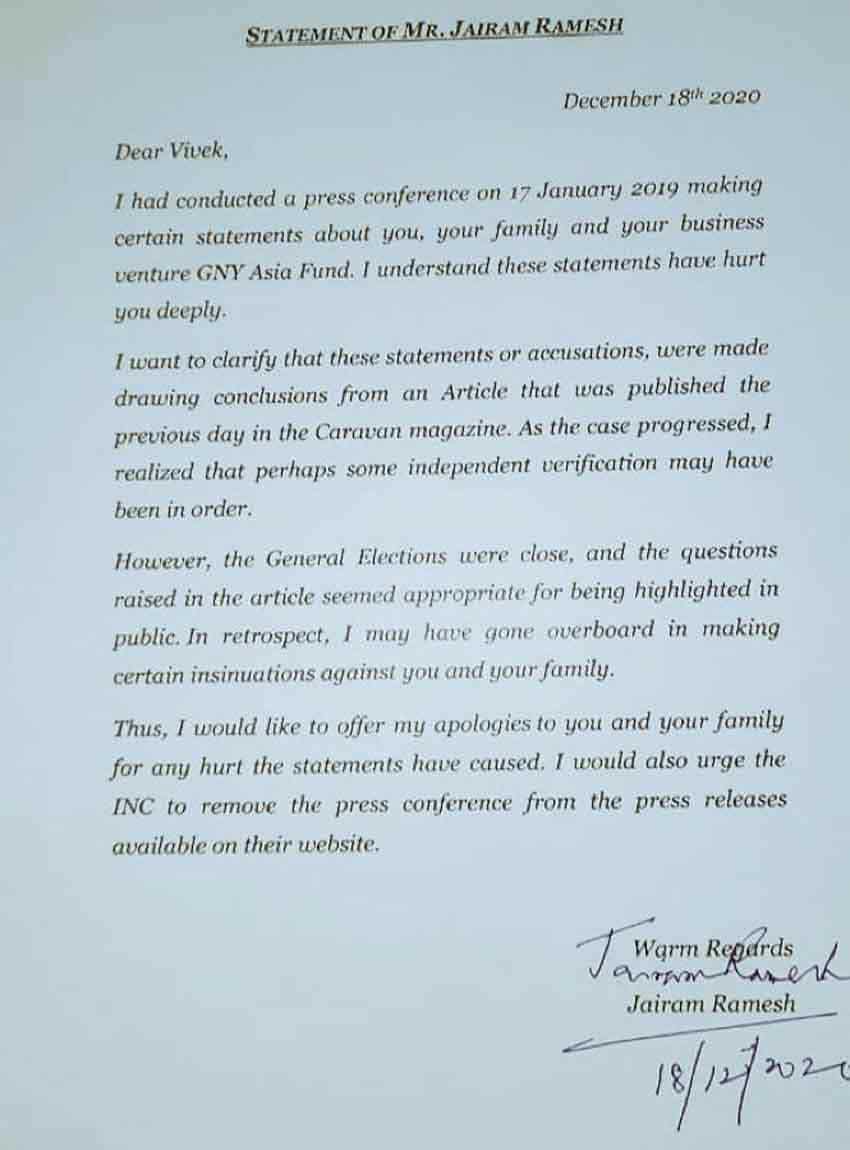 The Congress leader concluded by writing, “Thus, I would like to offer my apologies to you and your family for any hurt the statements have caused. I would also urge the INC to remove the press conference from the press releases available on their website.”

The apology was accepted by Vivek Doval.

The Caravan article titled ‘The D Companies’ had allegedly claimed that Vivek Doval ran a hedge fund whose promoters were of dubious antecedents.

In the letter of apology, Ramesh rued that he should have conducted independent verification on the facts of the articles before making accusations against him, his family and business in a press conference.

The criminal defamation case against Congress leader Jairam Ramesh was closed by a Delhi Court on Saturday after the leader tendered an apology.

As per an IANS report, even though Additional Metropolitan Magistrate Sachin Gupta has shut the case against Ramesh, the defamation proceedings against the magazine and journalist Kaushal Shroff will continue.