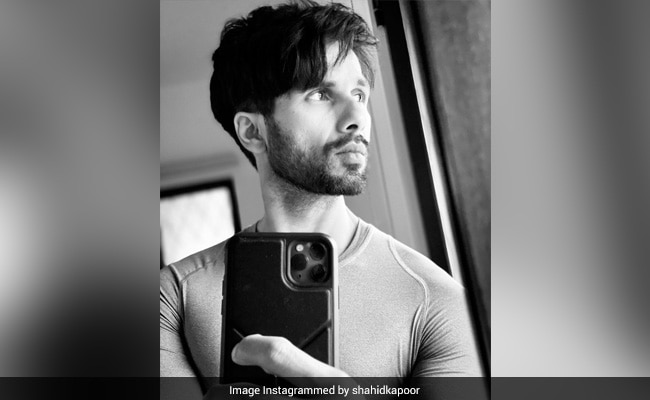 Shahid Kapoor, who was busy with the shoot of his new film Jersey, wrapped its shooting schedule recently. The actor, back at his home, is enjoying the quality time he’s getting before he starts filming new project. On Thursday, Shahid Kapoor posted a selfie on Instagram and his caption is winning the Internet. In his post, he wrote: “Another journey comes to an end. Before I need to become someone else again. A few days of myself ness….” The black and white photo features the actor sporting a t-shirt while clicking a selfie. Check out Shahid Kapoor’s latest post here:

Last week, after the film’s wrap, Shahid Kapoor shared his experience of working during coronavirus pandemic in an Instagram post. “It’s a film wrap on #jersey …. 47 days of shoot during covid. Just unbelievable. I am so proud of the entire team. It’s nothing short of a miracle. I want to thank each and every one from the unit for coming to set every day, putting themselves at risk and doing what we all love doing. Telling stories that touch hearts and make a difference. Jersey is a story that speaks of a Phoenix rising from the ashes. The triumph of an indomitable spirit,” he wrote

Shahid added: “If there was ever a time I could connect with the underlying spirit of a film this was it. As we all fight through this pandemic. Let’s always remember. This shall pass too. Here’s to my best filmmaking experience yet. Here’s to Jersey … we shall overcome!”

Jersey is the Hindi remake of the 2019 Telugu movie of the same name. It will also feature Shahid Kapoor’s father Pankaj Kapur as his mentor. The film is directed by Gowtam Tinnanuri, who also made the original Telugu film.