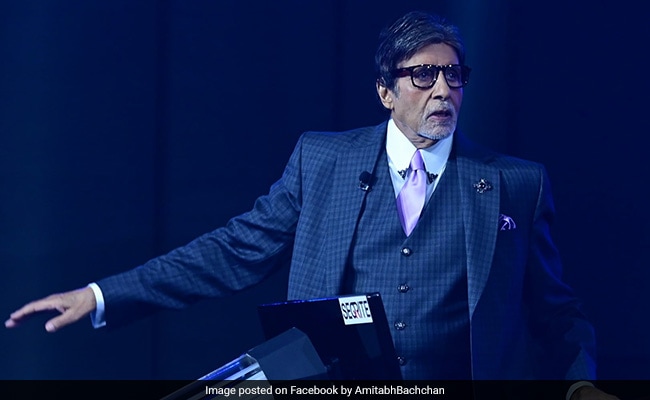 KBC 12: Big B in a still from the show. (courtesy: AmitabhBachchan )

Amitabh Bachchan has only been hosting children in this week of the popular TV quiz show Kaun Banega Crorepati 12 because it is students-special week. Big B began tonight’s episode with yesterday’s rollover contestant Deeksha Kumari, a 14-year old student from Bihar. Deekhsa, who studies in eight standard, managed to earn 6,40,000 points and she quit the game after that. For the uninitiated, in this week of the game show, the students will be earning points instead of money and the amount will be transferred to their accounts once they turn 18. The second contestant to make it to the hotseat was Priya Kaur, 15, from Srinagar. She managed to answer the Fastest Finger First question within 2.67 seconds, making her the only contestant of the season to answer the question in the least time.

During the course of the game, Big B talked to Priya Kaur about her life in Srinagar and she revealed that unlike the other places, her examinations take place in November due to the cold weather there. Big B, recalling his school days in Nainital, added that his school session took place in November and that when he began his graduation, he had to wait till July for the session to start. During the episode, Priya also discussed topics like pollution and mentioned the ways one can help to work towards the environment. Impressed with Priya’s knowledge, Big B gave her a nickname “Ms Samajhdar.”

Some of the questions asked in tonight’s episode of KBC 12  were:

Which of these terms is common to the names of JDU and RJD political party?

Which of these spices is obtained from the dry fruits or seeds of a fruit?

According to the scriptures, which of the following fought a battle for 18 days?

Which layer of the atmosphere is rich in Ozone?

In India, which organisation conducts exams for recruitments to the IPS, IAS and IFS?

In 1995, who became the winner of first ever Filmfare R D Burman Award for New Music Talent?

Which of these is a type of hair accessory primarily worn by Punjabi women?

Watch this space for more updates on Kaun Banega Crorepati 12.