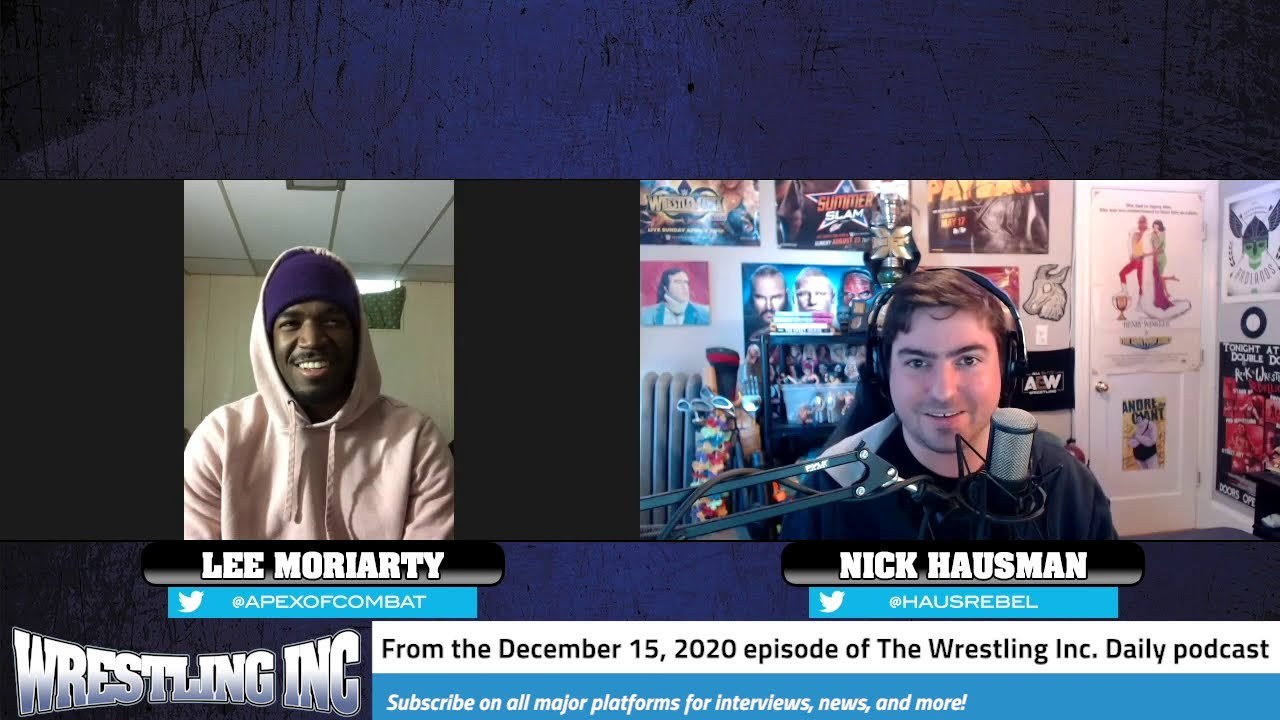 “The Apex of Combat” Lee Moriarty sat down with Wrestling Inc. Managing Editor Nick Hausman on a recent episode of The Wrestling Inc. Daily podcast where they discussed Moriarty’s involvement in Limitless Wrestling’s Vacationland Cup. Before that, Moriarty discussed finding himself and his character.

“It’s cool because I’m not just finding myself in wrestling. I’m finding myself in my personal life and who I am, and I think they kind of go back and forth on each other and help me develop both of them,” Moriarty said. “Even during the pandemic, the first shut down when I wasn’t wrestling for months, unless you were signed, I kind of just played around with that aesthetic.

“I developed ways of doing intros and videos and stuff. I practiced editing [and] all these different things to try to develop it more and more and just kind of figuring out who that person was. I’m still developing it. It’ll never be final because I’m always changing and evolving, but I don’t feel like I have it just down yet. If I was to present it, I don’t think it’s finalized yet. This is not the final product of what I want it to be. I think I need a few more months.”

Hausman noted that ROH Pure Champion Jonathan Gresham has a similar philosophy. Moriarty agreed as he talked about his admiration for Gresham’s recent development through The Foundation and the Pure Title.

“He was one of those guys, I remember people talking to me about him all the time,” Moriarty stated. “He was an amazing wrestler, and he just needed that one thing to really stick out, but once he did The Foundation, that was really his big thing. I remember first seeing that mask, the tentacles and how cool it was, and it’s cool watching his pieces develop.

“Getting the robe, and getting the mask and getting the flag, I remember the promo he did when he was talking about restoring honor and Tracy Williams calling, at the end of the promo, on the phone and then that leads to the finals of Pure tournament. This long-term storytelling when you’re developing a character, that’s kind of what I wanted to do so stuff that happens to me through pro wrestling will be able to develop who I am, then they’ll be callbacks later on.

“It’s my favorite part. Especially being a free agent, I have the freedom to pretty much do whatever I want and figure out who I am for myself first before getting signed.”

Hausman noted that it’s tough out there for indie wrestlers to develop their characters since many indie shows are not able to run shows as frequently due to the pandemic. Moriarty noted that his schedule is not that different as he has managed it well enough to accomplish the things he wanted for himself.

“I don’t feel like my schedule is that different,” Moriarty admitted. “I released a list of my matches throughout the year, and if you look at the number of matches I had this year compared to the number of matches I had last year, it’s not that far off, and I think I wrestled a lot more in clusters so that I could then distance for a week or two. So I wouldn’t have to be around.

“Also because I’ve been getting known more, I’ve been getting more opportunities. So those doors are open a lot more for me, and also me being an artist, even though I’m not in a ring, I’m still developing a part of who I am. And I’m still trying to stay relevant that way, so I’m always figure out a way to keep evolving even if I can’t be in a wrestling ring right now.”

“Myron Reed and I have wrestled twice before, but it was years ago, way before we were are the [people] we are now,” Moriarty pointed out. “You see him develop with MLW and find himself way more than me with TAIGASTYLE. I feel like it would be a completely different match now, and I really want to face him at some point and pretty much, I want to work with everyone in the tournament. So I wish it was a round-robin thing so I could just fight everyone, but I know it can’t be that way.

“I really want to work with Daniel Garcia. I’ve known him probably longer than all the other Buffalo boys, but the funny thing is every time we’re scheduled to go on the show, something happens, and we just haven’t been able to meet yet. So I want to work with him. He’s probably my favorite independent wrestling to watch right now and also [Kevin] Blackwood. He’s another one I would look forward to facing but pretty much everyone.

“I could just keep going. [Christian] Casanova [and] Ace Romero. It’s just too hard to really narrow it down to say one or two names [Hausman notes that a match with Romero would be different than a match with Reed]. I can handle it. That’s how TAIGASTYLE is.”

Lee Moriarty will compete as part of Limitless Wrestling’s Vacationland Cup on Saturday, December 19th. For more information about how to watch the event please visit LimitlessWrestling.com. Lee’s full interview aired as part of a recent episode of our podcast, The Wrestling Inc. Daily. Subscribe to get the latest episodes as soon as it’s released Monday – Friday afternoon by clicking here.