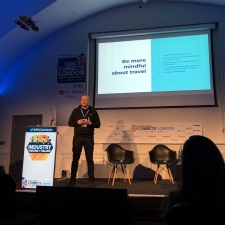 At Pocket Gamer Connects London 2023 Matchmade’s CEO Jiri Kupiainen dropped in on his ’10 weeks to save the games industry’ travels to explain his current quest (alongside GamesForest.Club‘s Maria Wagner).

The message is a simple one. Unless we all get smarter about the necessity and logistics of our business travel, the global turnaround in CO2 production that we’re all praying for simply isn’t going to happen. Kupiainen’s session got the message across in style and set the scene for his 10 week long quest across Europe to spread the word. Be sure to subscribe to their YouTube here and keep up with their journey.

10 weeks to save the games industry

“The times, they are a-changing,” Kupiainen explains. “Talking to people in the industry, 2023 looks like a year of record highs and record lows – on one hand, the nerds have won, and with a reach of nearly four billion people, games are now the biggest show in town. On the other hand, shiny new things like AR/VR, Web3, the Metaverse etc. have failed to deliver on most of their promises, and our industry is facing huge changes in areas like user acquisition, monetization and platform control. Investments in game startups dropped massively in Q4, and the layoff season is very much here.

“The climate, pardon the pun, is also a-changing. We’re starting to feel the effects of human-caused climate change across the globe, and the biggest entertainment industry in the world doesn’t have much of an idea when it comes to our role in fighting this self-caused existential threat. With the massive reach and engagement we command, we surely can play a big part – but what exactly does that look like?

“Personally, I’m a former (very) frequent flyer, and someone who has spent their lifetime carbon emissions budget many times over jetting around to games events and meetings across the globe. I also run Matchmade, a company that works with many of the leading game companies in the world and a network of nearly 20 thousand YouTube content creators, and have a decent idea of how powerful social media can be in getting people to do things.

“With all of the above in mind, I decided it’s time to put my money where my mouth is, which it turns out looks like doing a 10 week long games industry sustainable business travel show on YouTube. Not a category with much competition today, but someone’s gotta be the first.

“To do this, I’ve partnered with GamesForest.Club, an NGO helping game companies to reduce their ecological footprint. For the next two and a half months, I’ll be traveling around Europe by train together with Maria Wagner from GamesForest.Club, documenting how doing business development without flying looks like in reality, and talking to industry thought leaders about the future of our industry, as well as trying to figure out what exactly we can do to address the climate crisis.

“We recorded our first episode in Berlin, featuring Riad Djemili from the indie game developer Maschinen Mensch and Liz Thieme from the fashion upcycling startup Rebirth Studios. These two companies perfectly capture many of the unique things about the Berlin scene, and I’m really happy about how the interviews turned out. Everything else has been a mess, and playing a content creator has been a humbling experience with an endless variety of hardware and planning issues, and countless and countless hours of editing just to produce 30 minutes of something half decent that people will hopefully want to watch.

“A big chunk of this editing work was done on the train from Berlin to London, which honestly was the least dramatic part of the journey this far. You can watch the results on YouTube (video above). Please like, subscribe, share, and above all comment. I hope that by the time we’re done with this experiment, we’ll have a way better idea of what we’re doing – and if we succeed, maybe the biggest entertainment industry in the world will also have a few new ideas on what we can do to address the biggest challenges we’re facing.”