Despite several COVID-related setbacks, injuries, and recastings, Netflix’s The Witcher season 2 is back in full swing. On the official Netflix’s The Witcher website, it’s been a days-long celebration of the show, invoking the “law of surprise” regarding what the team reveals. The latest showing has to do with a script page from the upcoming season, a page that is now public for those interested.

The below script shares mild spoilers for those that want to go into the new season completely blind, but nothing major storywise for anyone curious to see what it looks like: 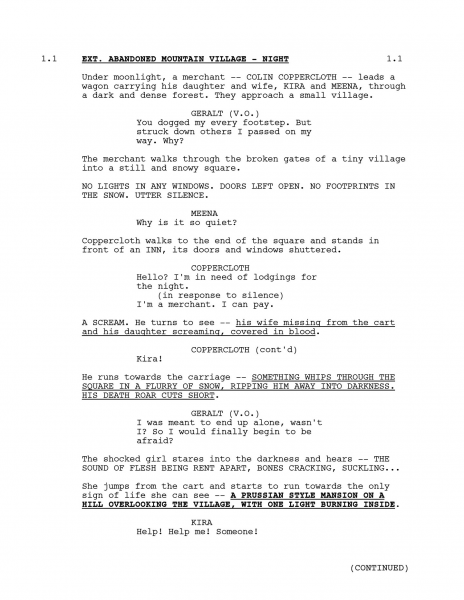 Text too small? The Netflix team also shared the script page (from an official account) over on Reddit as well, seen here.

As for the show itself, Netflix shared the new season’s official synopsis earlier this year, saying:

Convinced Yennefer’s life was lost at the Battle of Sodden, Geralt of Rivia brings Princess Cirilla to the safest place he knows, his childhood home of Kaer Morhen. While the Continent’s kings, elves, humans and demons strive for supremacy outside its walls, he must protect the girl from something far more dangerous: the mysterious power she possesses inside.

Given how successful the first season was for Netflix, and the fact that showrunner Lauren Hissrich has mentioned that fan feedback played a critical role with the upcoming season (as seen by the much-needed redesign), season two is poised to be an epic continuation of Geralt’s story, albeit much darker than that of season one.

Thoughts on the above Netflix’s The Witcher season 2 script? What are you excited for the most regarding future episodes? Toss a comment to the comment section below and tell us what you think!