The Nevada agency responsible for enforcing the state’s coronavirus restrictions has dropped fines it imposed after President Trump held a campaign rally at an airport hangar in September.

The Douglas County District Attorney’s Office, representing the county and the management contractor for Minden-Tahoe Airport, reached an agreement with Nevada Occupational Safety and Health Administration monitors to dismiss the fines, arguing they amounted to selective enforcement and violated the First Amendment, the Gardnerville Record-Courier reported. 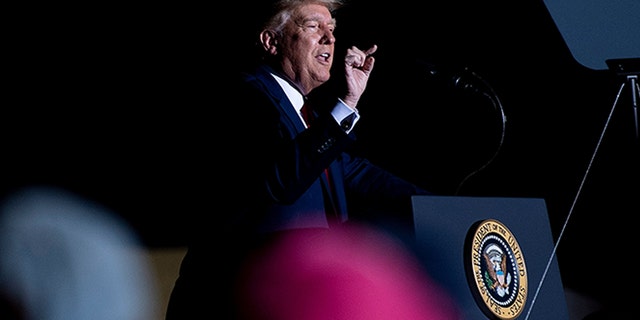 US President Donald Trump speaks during a campaign rally at the Minden-Tahoe airport in Minden, Nevada on September 12, 2020.  (Getty Images)

After the rally, health officials said they feared the gathering of mostly maskless attendees would become a super-spreader event.

In October, OSHA monitors slapped Douglas County and ABS Aviation with fines of $2,950 and $2,603, respectively, saying that allowing an event in violation of Gov. Steve Sisolak’s prevention measures violated the agreement the county signed to receive coronavirus relief funds.

Sisolak ultimately let the county keep the $8.9 million in relief because he said he didn’t want to punish residents in need of aid.

“The dismissals will be formalized in settlement agreements, and no formal complaints will be filed before the Nevada OSHA Board of Review, bringing this matter to a successful conclusion,” Douglas County spokeswoman Melissa Blosser told the Reno Gazette-Journal.

The dismissal comes amid a statewide coronavirus surge that has prompted officials to renew their focus on enforcing prevention guidelines.