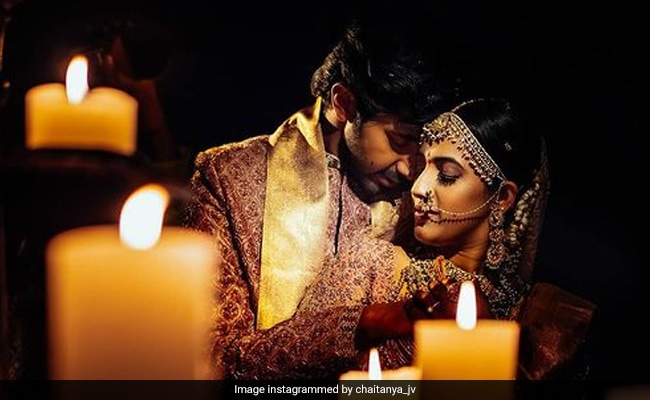 Actress-producer Niharika Konidela, who got married to Hyderabad-based techie Chaitanya earlier this month, has actively been sharing pictures from her grand wedding which took place in Udaipur. However, this time her husband Chaitanya delighted his Instafam with a few stunning shots from their dreamy destination wedding. On Thursday, he shared a few pictures from the wedding and he captioned them: “Day 3 Wedding.” Tagging his wife Niharika, he added, “I will always be this close to you when you need me.” In the comments section of his post, Niharika dropped a few heart emojis. After a grand Udaipur wedding, Niharika and Chaitanya hosted a reception in Hyderabad last week.

A few days ago, Niharika shared a stunning picture from her wedding ceremony and she wrote: “I promise not to miss any opportunity to make you laugh just like this. (Even if it means I have to hit you) there’s no going back now. Hi Chay.” ICYMI, this is the post we are referring to:

Niharika Konidela stepped into the Indian entertainment industry as a television presenter, after which she switched to starring in web-series, which were produced by her production company Pink Elephant Pictures. She has starred in web-series like Muddapappu Avakai, Nanna Koochi and Madhouse, which she had also produced. She made her debut in films with the 2016 movie Oka Manasu. Niharika Konidela was last seen in Sye Raa Narasimha Reddy, which also featured her superstar uncle Chiranjeevi.