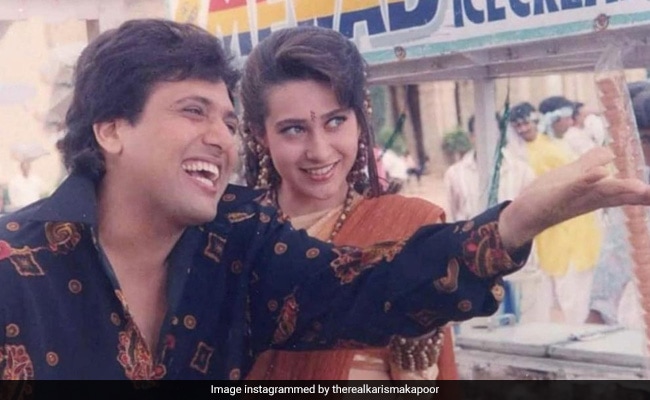 We still try to match Govinda and Karisma Kapoor’s funky steps to the track Main Toh Raste Se Jaa Raha Tha and on the actor’s 57th birthday, Karisma treated us to a fantastic throwback picture that refreshed our Coolie No 1 memories. On Govinda’s birthday, the makers of upcoming film Coolie No 1, which is a remake of David Dhawan’s 1995 film, dropped a new song titled Mirchi Lagi Toh from the film’s playlist and made Karisma Kapoor nostalgic, after which she posted a photo of herself and Govinda from the sets of the original 1995 film on her Instagram profile. It is a still from their song Main Toh Raste Se Jaa Raha Tha, a redux of which features Sara Ali Khan and Varun Dhawan.

The new film has also been directed by David Dhawan (Varun Dhawan’s father). Earlier, Husnn Hai Suhaana from the upcoming film released on the Internet and in the song, Varun Dhawan and Sara Ali Khan gave a new twist to Govinda and Karisma Kapoor’s quirky moves.