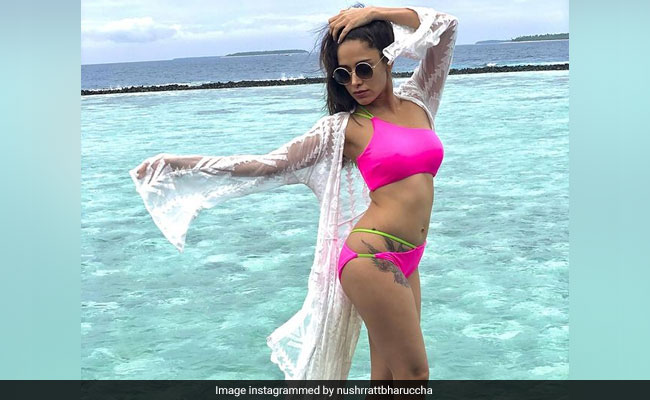 Nushrratt Bharuccha revisited throwback memories from her vacation diaries on Wednesday. The actress was holidaying in the Maldives around this time last year. In her recent Instagram posts, Nushrrat posted some stunning pictures from her vacation and accompanied them with thoughtful notes. Her latest post, which features the actress making memories in the Maldives in a pink bikini, comes with a caption that read: “This is an appreciation post for all that I had when I had it… all that I did when I did. One year later, today I remember it all so fondly… miss it all so dearly but feel so blessed and lucky to have had it. To have lived it the way I wanted it. So, thank you Universe for giving me all that you have, the way that you have! #Gratitude.”

Sharing another set of photos, in which she can be seen swimming underwater, Nushrratt Bharuccha wrote: “This time last year, I let my hair down…felt the rising sun warm me up… dived deep into the blue water…. swam with fishes… almost stopped breathing when a sea turtle swam past me…Ate the best food, drank the best wine, danced all day all night… slept out on the porch under the bright full moon…woke up to the sound of the ocean… pure joy!”

Nushrratt Bharuccha’s vacation wardrobe was fabulous last year, just like her. On one day, she enjoyed the breathtaking view of the beach destination in a yellow bikini while on another, she lit up the Maldives in pink and red bikinis.

Check the photos that Nushrratt Bharuccha shared from the Maldives last year:

Nushrratt Bharuccha made her debut in Bollywood with the 2009 film Kal Kissne Dekha. Post that, she went on to feature in films such as Pyaar Ka Punchnama 2, Sonu Ke Titu Ki Sweety and Dream Girl. Nushrratt Bharuccha was last seen in Hansal Mehta’s Chhalaang, in which she shared screen space with Rajkummar Rao. The film was earlier titled Turram Khan. Chhalaang premiered on Prime Video in November.