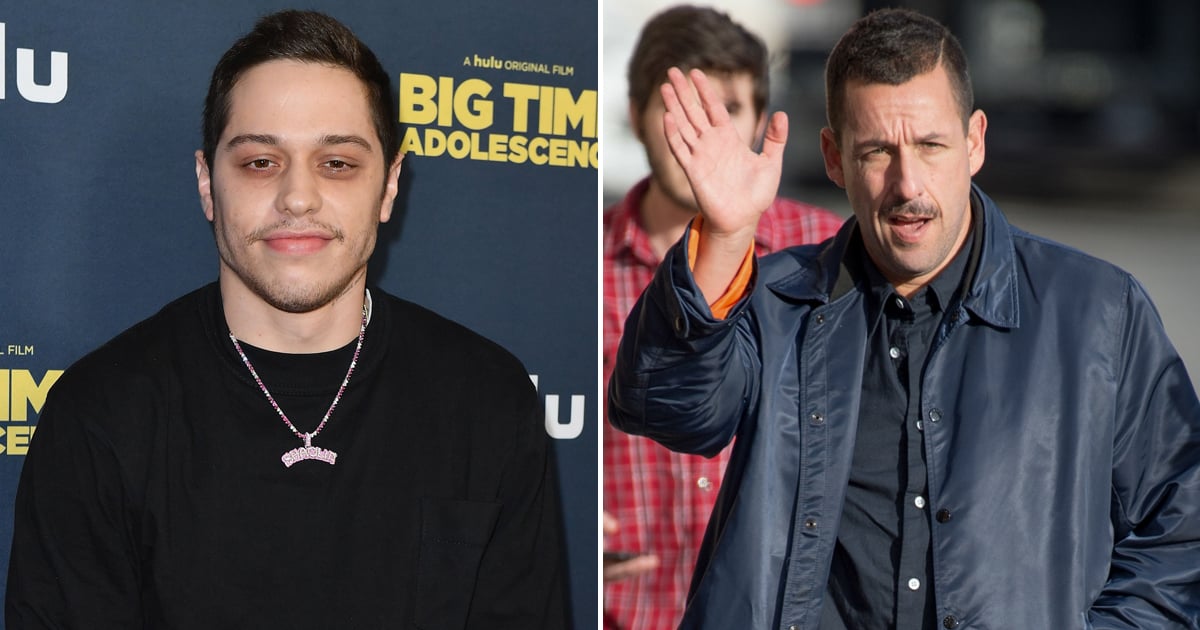 I used to be able to sum up Pete Davidson’s fashion in a few words: unpredictable, maximalist, and oh yeah, neon. His mixed prints, cropped pants, and extensive sneaker collection carved him out a space as a “scumbro” style icon — whether he planned on it or not. But lately, Pete has been shifting his style strategy away from standout streetwear to lean fully into comfort, and he told POPSUGAR he’s looking to Adam Sandler for inspiration.

After a couple years of nonstop headlines, Pete laid relatively low in 2020. Aside from Saturday Night Live skits where he’s increasingly in front of the cameras, the last public appearance Pete made was at the Big Time Adolescence premiere in March, where he wore all black. I wouldn’t say the era of clashing colors and slides with socks is over, but when Pete greeted me on a Zoom call recently wearing a maroon North Face sweatshirt it felt like the aesthetic of any at-home 20-something guy, famous or not.

“[Adam Sandler is] just the coolest, most confident and comfortable person you’ll ever see.”

As Pete and his grandfather, known as Poppy, chatted with me about their holiday Amazon Echo spot, the King of Staten Island star provided insight into the way he puts together outfits these days. Of course, Pete takes some tips from Poppy, whom he called “a fashion icon” in his own right. Pete described Poppy’s daily wear — “cool button-up flannels,” jeans, and New Balances — and I thought of my own grandpa, who subscribed to the same uniform. Is there something they know that we don’t?

Outside of his own family, however, Pete is inspired by Adam’s way of dressing. Pete told me he used to “look at whatever everybody was wearing” to find “cool” outfits, but now, he’s prioritizing comfort above all else. “I like wearing big hoodies and oversized sweatpants,” he shared. “I think that’s my favorite, most comfortable thing.” He admires the way Adam (another SNL alum) nailed a signature style around his own ease.

“I pretty much just took whatever Adam Sandler was wearing and have tried to do that, because he’s my favorite fashion icon,” Pete said. “If you look at any photo of Sandler on a set, or when he’s in his regular clothes, he’s just the coolest, most confident and comfortable person you’ll ever see. I’ve tried to adapt that type of style now.”

Adam and Pete are close in real life (Pete once said, “He’s definitely the best. Just like caring and sweet and not full of crap. Which is very rare to find.”), which makes this stylish nod all the sweeter. In fact, aren’t we all dressing a little more like Adam these days, with loungewear on the rise in 2020? According to Pete, we’re all just catching up to the standard Adam set. “He’s had the tip the whole time.”