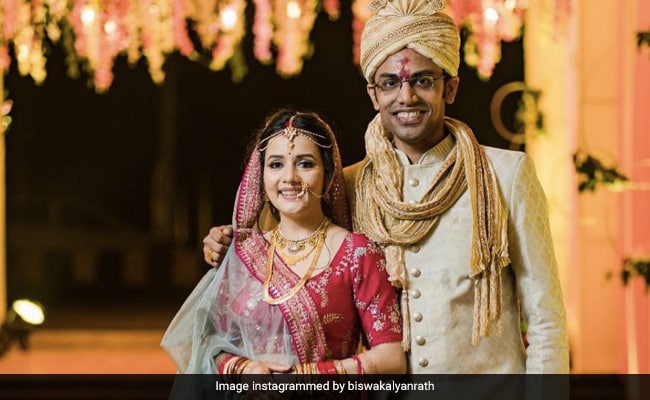 Actress Sulagna Panigrahi, who is best-known for her performance in Murder 2, got married to comedian Biswa Kalyan Rath in an intimate ceremony on December 9, the actress announced in an Instagram post on Saturday. Both Sulagna Panigrahi and Biswa Kalyan Rath posted photos from their wedding ceremony, as well as from their reception. On their big day, Sulagna wore a red bridal lehenga, which she paired with a pastel blue dupatta while Biswa Kalyan Rath picked a cream-coloured sherwani. The actress opted for a red saree for their wedding reception, for which Biswa wore a blue suit. Sharing the photos, the comedian wrote: “Biswa married aadmi” while the actress captioned her post: “Pic 1- Watching our single life burn away. Pic 2 – it’s gonna be a fun ride. We married now Biswa, wooho! 09.12.2020 #SulagnaKaKalyan #brideandgroom #shaadi #hogayishaadi #shaadishuda # #shaadi2020 #somegoodnews #marriedlife #marriagematerial.”

Check out the photos from Sulagna Panigrahi and Biswa Kalyan Rath’s wedding here:

Sulagna Panigrahi and Biswa Kalyan Rath’s wedding came as a surprise for their fans as the duo haven’t exactly shared pictures featuring each other on their respective social media profiles before.

Sulagna Panigrahi has worked in several television shows and a couple of films. She made her television debut with Amber Dhara, in which played the lead role. Post that, she starred in shows such as Do Saheliyaan and Bidaai.

She featured alongside Emraan Hashmi in the 2011 film Murder 2, She played the role of a poor college student, who gets murdered by a psychopathic serial killer after she chooses to become a part-time prostitute to solve her financial crisis. The film also starred Jacqueline Fernandez.

Other than Murder 2, Sulagna Panigrahi has starred in films like Ishq Wala Love, Isai, Guru Dakshina and Raid.

Biswa Kalyan Rath is a stand-up comedian who is known for featuring as a judge in Prime Video’s Comicstaan – both Season 1 and 2.