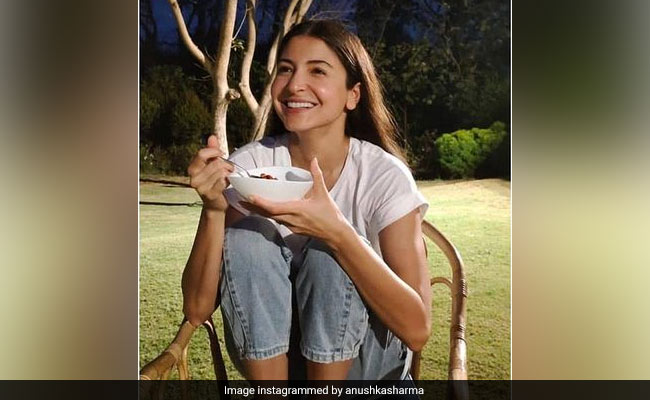 Anushka Sharma, who is expecting her first child with husband, cricketer Virat Kohli, next month, made a trip down memory lane and shared a throwback from the time when she could sit comfortably with her legs on a chair. Anushka Sharma, alongside her photo, also wrote a hilarious yet cute caption: “Throwback to when I could sit like this and eat. Now I can’t sit like this but I can EAT.” In the old picture, the actress can be seen wearing a white t-shirt and denims and eating food out of a bowl. Her smile is enough to brighten up your day.

Anushka Sharma announced her pregnancy in August. She shared an adorable picture of herself and Virat Kohli and wrote: “And then we were three! Arriving January 2021.”

It is always a delight when we chance upon a photo of mom-to-be Anushka Sharma. Earlier this month, Anushka, who is keeping up with her fitness routines even during pregnancy, posted a throwback photo of Virat Kohli helping her with a yoga pose and wrote: “This exercise is ‘hands-down’ (and legs up) the most difficult one. Throwback. PS – As yoga is a big part of my life, my doctor recommended that I can do all such asanas that I was doing before I was pregnant, barring twists and extreme forward bends, but of course with the appropriate and required support. For the Shirshasana, which I have been doing for many years, I ensured that I used the wall for support and also my very able husband supporting me balance, to be extra safe.”