WEST PALM BEACH, FLA. – Sen. Marco Rubio, R-Fla., addressed the rising controversy over migrants in the U.S. recently spurred by Florida Gov. Ron DeSantis sending 50 migrants to Martha’s Vineyard, Mass., stating that the few dozen people are nothing compared to what communities on the southern border face on a constant basis.

Speaking to reporters in West Palm Beach, Florida, on Friday, Rubio said the country has a migration “catastrophe” on its hands thanks to Biden administration policies.

“This is what happens when you have an administration that basically is telling people if you come into this country illegally, you’re going to get to stay,” Rubio said.

Responding to a question about his governor sending 50 people to Martha’s Vineyard, Rubio said he could not speak directly about what DeSantis did because he was not familiar with the details behind it. Still, he said what border states like Texas, Arizona, and Florida deal with is much worse, citing Monroe County, Fla., which he said saw 100 migrants in the previous week who landed on Florida’s shores.

MARTHA’S VINEYARD RESIDENTS LAMENT LACK OF RESOURCES, EVEN AS ISLAND IS FLUSH WITH CASH AND BEDS

“What was flown to Martha’s Vineyard is but a small, like minuscule fraction of the problem being faced and the burden being carried by just a handful of states,” he said. “A handful of border states and a handful of communities in those states are taking on 90% of the burden of uncontrolled illegal immigration.”

He then criticized Democratic-led jurisdictions not near the border that say that they welcome migrants.

“It’s easy to be a sanctuary city or sanctuary county when illegal immigration is not burdening you,” Rubio said. 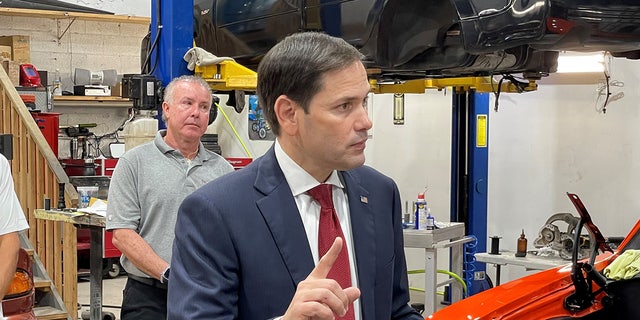 The senator also noted that what states like Florida and Texas have done by relocating migrants is no different from what the federal government does.

“DHS puts people on charters every day and flies them all over the country without notifying local officials,” he said.

Rubio – who is of Cuban descent – made clear that he is not blaming the migrants themselves.

“I always sympathize with people that are coming to this country,” he said. “They’re desperate. Because of communism, because of poverty, because of violence. Of course. But the truth of the matter is every country in the world has to have immigration laws.”