“Saturday Night Live” closed out its last “Weekend Update” segment under a Donald Trump administration with a final round of jabs at the president as well as some self-deprecating humor about its hosts.

At the top of the popular current events segment, host Colin Jost noted that the Dec. 19 show, “barring a reverse Christmas miracle” would be the last before the sketch show goes on a break until the New Year, returning after president-elect Joe Biden is sworn in on Jan. 20.

“As a president, he was mostly bad, but there were a few bright spots. So, before he is tranquilized and moved like a dinosaur in Jurassic Park, I just want to take a moment to recognize some of his greatest moments in office,” he said.

With that, the segment played a brief sizzle reel showing Trump in various unflattering photos as well as in videos of gaffes the president had throughout his time in office and on the campaign trail. The clips ranged from lighthearted moments such as Trump’s pontificating on the effectiveness of toilets, saying, “people are flushing toilets 10 times, 15 times,” to more serious moments like when he mocked disabled reporter Serge Kovaleski.

The latter clip elicited boos from the “SNL” live audience.

“The White House has left it up to the states to distribute the vaccine which shocks me because, knowing Trump, I thought for sure it would be done through a live powerball lottery,” he said. “The ratings would have been insane and it would have been the first White House job Ivanka was qualified for.” 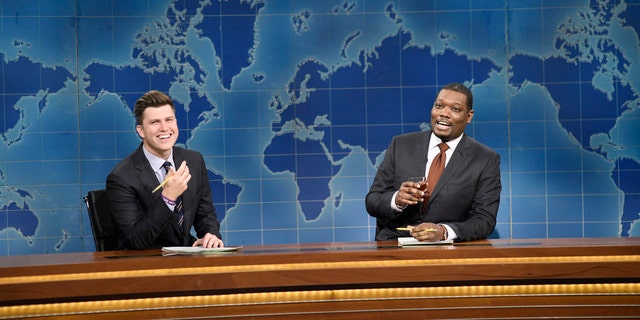 ‘Weekend Update’ noted that Dec. 19 marked its last show under a Donald Trump presidency. (Will Heath/NBC)

From there, Jost and Michael Che changed things up a bit for the holidays by having each other tell jokes that they’d never seen before that were written by their co-host. For example, Jost was forced to make a joke at the expense of Rosa Parks that was written for him by Che.

Meanwhile, Che was tricked into showing his support for disgraced financier who was charged with sexually abusing numerous underage girls over several years, Jeffrey Epstein.

However, the biggest laugh came when Jost was tricked into mocking his wife, Scarlett Johansson, for past criticism she faced for taking on roles of both minorities and people in the LGBTQ community.

“It was announced that Creed singer Scott Stapp will play Frank Sinatra in an upcoming movie,” Jost said. “But the good news is that Sammy Davis Jr. will be played by Scarlett Johansson.”