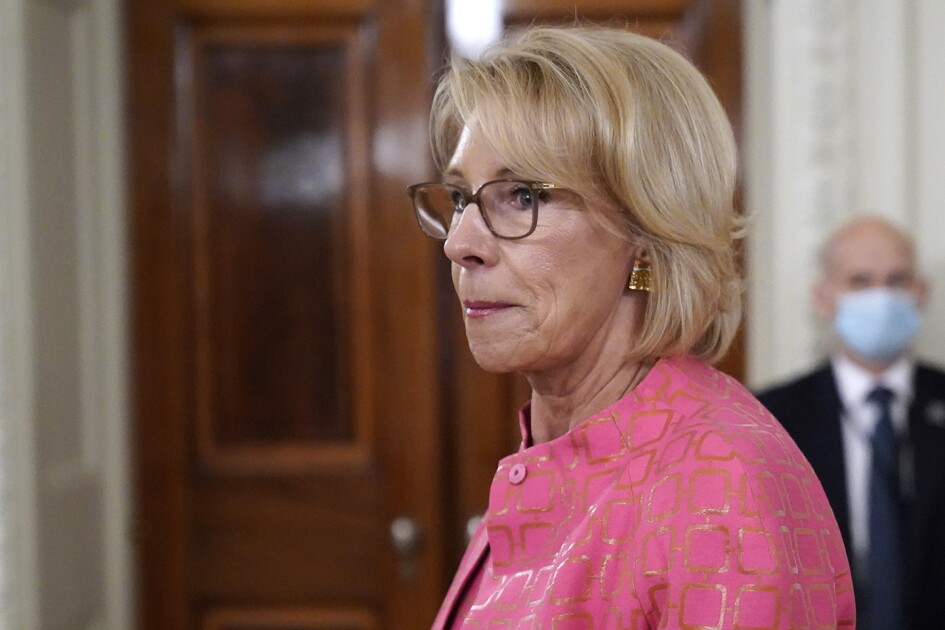 In the U.S. Department of Education, that work started quickly and continued steadily for four years. Under the leadership of Education Secretary Betsy DeVos, the agency rescinded several consequential pieces of civil-rights guidance—documents that are meant to nudge educational institutions into certain actions, but do not carry the force of law. Civil rights activists say these actions had a disparate impact on historically disenfranchised students.

The department also scaled back on sweeping civil rights investigations, boasting that it was able to clear a backlog of cases and bring resolution to families “instead of seeing every case as an opportunity to advance a political agenda,” in the words of Assistant Secretary for Civil Rights Kenneth L. Marcus, who was appointed by President Trump.

The administration also proposed trimming funding to the office for civil rights, a request that Congress would ignore, and struck a strong stance for religious freedom; DeVos lauded a U.S. Supreme Court decision this year that said it’s unconstitutional to keep families from using state tax-credit scholarships to pay for tuition at religious schools.

Under a new administration, civil rights activists want to see a dramatic U-turn from the past four years. But it’s more than just bringing back some of the guidance from the Obama administration, they say: The coronavirus pandemic has deepened inequities between student groups and the Black Lives Matter protest has brought historical attention to these disparities. Civil rights advocates say the department has a role to play in addressing those issues.

“That gives me hope that someone that he picks will center students and families in the heart of any decision making,” Lhamon said. “Unfortunately, in the past four years, all we saw was blatant efforts to dodge civil rights under the law.”

That guidance came in for fierce criticism after a 2018 school shooting in Broward County, Fla., that left 17 dead. Critics said that the guidance had made schools wary of suspending or expelling students like the troubled student behind the crime. A state commission found that the district’s discipline policy was not to blame for the shooting, but that it needed to be improved.

The Trump administration took an “appropriate and mindful step” in rolling back that guidance after touring the country and listening to educators, said Jonathan Butcher, a senior education policy analyst at the conservative Heritage Foundation, a Washington think tank.

“No one wants any child to be sanctioned or disciplined for the color of their skin, but they looked at what the Obama administration had been advocating for and said it did create a quota system, and it took the emphasis off of looking at the behavior of students.”

Nevertheless, Butcher said, “it does sound like this is something that will be revisited.”

Here are other issues where civil rights activists are looking to see change in the next four years:

The Civil Rights data collection, conducted every two years and encapsulating data from all of the nation’s public schools, offers one of the deepest looks at the state of public education. The Education Department said it will delay the data collection that would cover the 2019-20 school year because of the coronavirus pandemic. But even before this announcement, some were concerned that the data has been messy and thus hard to use for guiding policy or underpinning litigation by advocates.

“There’s very little accountability for failing to report these data,” particularly around school policing and arrests, said Daniel Losen, the director of the Center for Civil Rights Remedies, part of the Civil Rights Project at UCLA. One of his analyses found 60 percent of districts were reporting no school-based arrests at all to the CRDC.

The Trump administration also wants to collect new information about documented incidents of sexual violence committed by and against school staff, as well as new data on religiously related harassment and bullying in schools. At the same time, it wants-to stop collecting information on preschool enrollment and discipline by race.

“The CRDC is our main collection of data on early-childhood and preschool discipline. In fact, in one of the more recent reports prior to the Trump administration, one of the big pieces of news was that there was disproportionality in suspensions in preschool,” said Russell Skiba, a professor in counseling and educational psychology at Indiana University-Bloomington. “It was certainly one of the most striking things to take out any data about suspension and expulsion at this point, but especially to take out disaggregated data.”

The same month that DeVos was confirmed, the Education Department rescinded guidance from the Obama administration that said schools must allow students to use the bathrooms and locker rooms that correspond with their gender identity.

That policy is another one likely to be taken up early in a Biden administration, said Francisco Negrón, the chief legal officer for the National School Boards Association. Since that guidance was rolled back, there has been a Supreme Court case that speaks to that issue: Bostock v. Clayton County, Ga., where the court held that firing someone for being gay or transgender is a civil rights violation. Further, the court said that discriminating against someone for being gay or transgender is a form of sex discrimination—the very issue the Obama administration addressed in its transgender guidance.

The Trump administration has said that the Bostock case doesn’t apply to Title IX, the federal law that forbids students from discrimination based on sex in education programs or activities. A new administration will likely take on that issue, particularly in the area of allowing transgender students to participate in sports activities matching their gender identity, Negrón said.

The Trump administration rolled back Obama-era guidance that aimed to help schools determine how they could legally use race in efforts to promote school integration. The guidance, like all guidance, does not have the force of law. But following the suggestions in the guidance offers a roadmap for school districts that may want to take on that work, and pulling it back had a chilling impact, say advocates who want to see that guidance come back.

Halley Potter, a senior fellow at the progressive think tank Century Foundation, recently co-authored a report taking a look at the state of voluntary and mandated desegregation programs nationwide. The report found that 185 districts had active voluntary desegregation policies, and a quarter of those were implemented in the past four years, even without federal guidance or support.

But that should not be seen as a reason for the federal government to withdraw any guidance or support on the topic, she said.

“I think it’s great to see it’s possible to make local progress on this,” Potter said. “But there’s part of this data that shows how much more impact we could have on integration if you had some federal focus on it.”

Behind the scenes, the Education Department tried to make some changes to how it processed civil rights complaints. The goal was to make it easier to dismiss complaints from those who filed multiple, similar charges. Such cases represented a drain on the department’s resources, said the office for civil rights.

The department reversed itself on that action, after facing lawsuits from advocates who argued that the department had an obligation to investigate all complaints with merit. But it’s still not investigating cases with vigor, said Eve Hill, a former deputy assistant attorney general for civil rights in the Justice Department. Instead, investigators are trying to get quick fixes to complaints, rather than enter into agreements that require monitoring.

This is particularly important for complaints related to website accessibility. Once schools shifted to online learning, the fact that some web tools are inaccessible for students with disabilities became an acute problem, she said.

“Those schools were not prepared to make their online learning accessible. That’s a big enforcement issue,” Hill said. “It would have been a great thing for guidance to have been written on this.”

Other Issues for Enforcement

While the department’s focus on rolling back Obama administration policies often made headlines in education circles, what drew less attention were policies that remained on the books but were not actively enforced, Hill said.

For example, in 2014, in a rare show of bipartisanship, Congress passed the Workforce Innovation and Opportunity Act. That act includes regulations meant to steer youths and adults with disabilities to jobs where they work alongside people who do not have disabilities, making typical wages. This contrasts with “workshop” situations where adults earn less than minimum wage.

That law is overseen by the Rehabilitation Services Administration, which is a part of the Education Department, but very little work has taken place on helping schools develop stronger transition programs for students so that they’re prepared for employment, Hill said.

Negrón said that the NSBA would like to see the Biden administration appoint a “special presidential task force on public school transformation and equity” that could address these issues and many others. Jill Biden, a community college professor and the incoming first lady, could be well positioned to lead such a panel, which could also address issues such as digital learning and teacher training.

“It’s time we have that level of focus,” Negrón said.

During her leadership, Education Secretary Betsy DeVos said she was returning the office for civil rights to impartiality and neutrality. Her critics said that approach ignored systemic civil rights problems. Here’s a timeline of notable actions affecting K-12 schools:

February 2017: The departments of Education and Justice rolled back Obama-era guidance that schools must allow transgender students to use the bathrooms and locker rooms that match their gender identity.

September 2017: The department withdrew guidance written during the Obama administration that focused on how schools, colleges, and universities should respond to sexual assault and violence under Title IX.

March 2018: The Education Department’s office for civil rights announced that it was revising its case processing rules, allowing investigators to dismiss multiple similar complaints from the same source. Eight months later, facing a lawsuit, the department reversed itself.

June 2018: The Education Department announced it was delaying for two years a rule on how states must monitor minority student placement and discipline in special education. In March 2019, a judge vacated that action, saying the agency’s action was “arbitrary and capricious.”

July 2018: Saying that it went “beyond the requirements of the Constitution,” the Education and Justice departments pulled back on guidance released during Obama administration that offered a roadmap for how schools could legally use race to achieve integration goals.

December 2018: The department rescinded discipline guidance from the Obama administration that said school discipline policies could be in violation of students’ civil rights if they had a “disparate impact” on students of color—even if the policies were created without discriminatory intent.

May 2020: Nearly three years after rolling back Obama-era guidance, the Education Department released a rule that outlines how, and when, schools must respond to these reports of sexual harassment and assault. The new rules generally raised the bar for when schools must get involved in investigations.