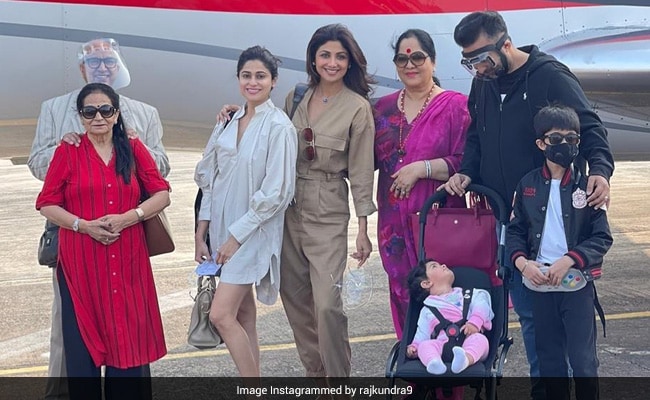 Shilpa Shetty and Raj Kundra finally managed to scoop some time out of their busy lives and flew to Goa on Sunday. The couple were accompanied by their son Viaan Raj Kundra and daughter Samisha. Shilpa Shetty’s mother Sunanda Shetty, and Shilpa’s  sister and actress Shamita also joined them. Posting a picture of the family standing next to a private plane, Raj Kundra captioned the post: “When the daughter is looking at daddy who looks like he is from out of space. First vacation of 2020.” He added the hashtags #goa #famjam, #staysafe, #christmas and #vacation to the post. Take a look at Raj Kundra’s post here:

Meanwhile, Shilpa Shetty posted a boomerang video with sister Shamita and she captioned the post: “Time to shut up and bounce! Happy Holidays all.” She added the hashtags #sistersquad, #traveldiaries, #holidays, #fun, #gratitude and #happiness to her post.

In terms of work, Shilpa Shetty was last seen as one of the judges on the TV reality show Super Dancer Chapter 3, alongside choreographer Geeta Kapoor and filmmaker Anurag Basu. The actress will next be seen in Sabbir Khan’s upcoming film Nikamma. The actress recently shot for her forthcoming film Hungama 2 in Manali, in which she will co-star with Paresh Rawal, Meezaan Jaaferi and Pranitha Subhash.

Shilpa Shetty, who made her Bollywood debut with the 1993 thriller Baazigar (which also featured Kajol and Shah Rukh Khan in the lead roles), is best-known for her performances in films such as Main Khiladi Tu Anari, Dhadkan, Life In A…Metro and Apne, to name a few.

Shamita Shetty is best known for her performances in Mohabbatein, Mere Yaar Ki Shaadi Hai and Zeher. She has also participated in realty shows like Bigg Boss 3 and Jhalak Dikhhla Jaa 8. She stars in the web-series Black Widows, alongside Swastika Mukherjee and Mona Singh.