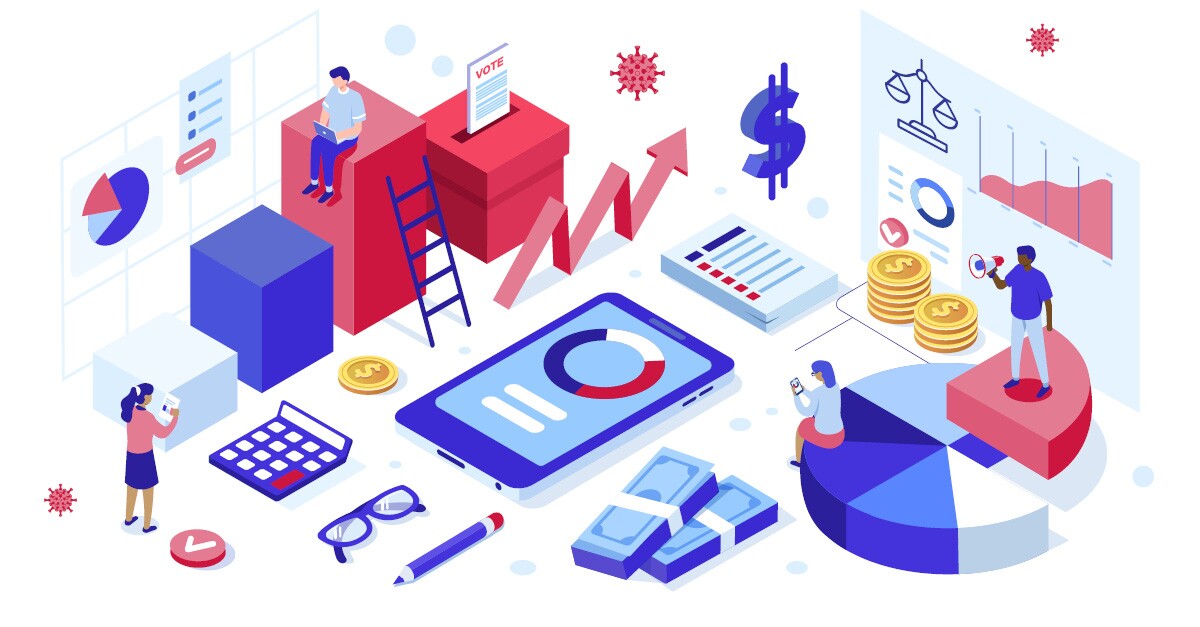 As racial inequity soars on the nation’s radar, math teachers are increasingly bringing social-justice questions into their classrooms to help students see the subject’s relevance and recognize that they can use it to become change agents in the world.

Teachers are drawing on high-profile issues such as policing patterns, the spread of the pandemic, and campaign finance to explore math concepts from place value to proportionality and algebraic functions. They’re using math to help students understand phenomena as varied as food deserts, disaster aid, and college-admission test scores.

“I’ve definitely seen an uptick in interest” in math lessons that infuse important social issues into instruction, said Bootsie Battle-Holt, a math coach who works with teachers on equity-focused math instruction at 22 schools in the Los Angeles Unified district. Julie Wright, a middle school math teacher in Portland, Ore., says she’s seeing a lot more activity on the Wiki she built for teachers to share social-justice math resources.
A new book that provides 22 high school lessons based on social injustice, and outlines the theory and pedagogy to support them, has become a bestseller for Corwin, which published it with the National Council of Teachers of Mathematics.

When the book, High School Mathematics Lessons to Explore, Understand, and Respond to Social Injustice, made the rounds on social media, the editors got so many requests from K-8 teachers that they’re now at work on three additional volumes aimed at those grade bands, said Robert Berry, who co-edited the first book and is NCTM’s immediate past president.

Many teachers prefer to think of math as a neutral zone, where the “universal language” of numbers doesn’t include highly charged events of the day—and prefer to keep it that way. But advocates of social justice math argue that that approach misses something important: the chance to help students use math to understand and critique the world around them, and find ways to change it.

“A lot of people want us to focus only on math, and if we’re going to use real-word examples, they need to be astronomy, or STEM, not race, or the nitty-gritty of what our Black and brown children face daily,” said José Luis Vilson, a former middle school math teacher in New York City and the executive director of EduColor, a national nonprofit that works on equity issues in education. “But my kids deserve to have a connection to the things we’re talking about.”

Teachers who discuss the approach on social media have at times come under verbal attack, with streams of tweets that deride “woke math,” and devolve into personal insults, obscenity, and threats, especially against women and female teachers of color. Some teachers declined to speak on the record, fearing they, too, could become targets.

Others said the work is too important to keep under wraps. They consider the blend of math and social justice issues potentially game-changing for students, especially those most often marginalized in math classrooms: students of color and those from high-poverty neighborhoods.

“All students need to be able to use math as a window to see the world, and a mirror to see themselves and their experiences, their communities,” said Berry. “But it’s particularly important for students of color, who often don’t see themselves in the mathematics curriculum.”

Typically, the use of civic and social issues to teach math is being led by teachers in their own classrooms. Occasionally, districts are supporting the practice districtwide. The Clayton County schools in Georgia, for instance, is building a social justice approach to math across its grade levels. The Seattle school district developed a framework last year that weaves questions of power and oppression into math instruction, along with explorations of ethnic identity, but it hasn’t been adopted.

Most social justice math is unfolding in middle and high schools, but some elementary teachers are linking the topics, too. Melissa Collins, a National Board-certified 2nd grade teacher in Memphis, blends math, history, and language arts into a unit about school segregation, using significant years in that timeline—like 1957, when nine Black students enrolled in all-white Central High School in Little Rock, Ark.—to teach place value.

Collins wants her students, all of whom are Black, to see themselves as “part of a continuum” of empowerment that includes Ruby Bridges, who in 1960 became the first Black child to attend a white Louisiana school; Thurgood Marshall, who led the legal fight for school integration and later became a Supreme Court justice; and the racial-justice advocates protesting in the streets today.

“With everything going on right now, it’s a perfect time to reimagine how we teach, to engage students and teach them a little about themselves,” said Collins.

At New Los Angeles Charter School, middle school math coach Mikel Edillon created a map of police shootings for a lesson on proportionality and graphing. With Black Lives Matter protests all over the city, he reflected on the purpose of teaching and concluded that helping his students—low-income students of color—see how math illuminates their world was at the heart of his job.

“I wanted to couch what I teach in something that’s topical and relevant for them,” he said. “Otherwise, why teach it?”

San Antonio teacher Dashiell Young-Saver rewrote his Advanced Placement statistics course because his students always complained that they didn’t see the point of probability exercises like calculating the chances of getting a red or a green M&M. They asked to study police use of force, so he used data from New York City police stops in a “socially relevant” approach to statistics. Young-Saver created a website, Skew the Script, to host lessons that use topics like wealth inequality and immigration to explore statistics concepts.

Shraddha Shirude, a math teacher at Garfield High in Seattle, designed a new course for this year, “ethnic studies math,” which explores oppression, identity, and other ideas in fields from technology to health. Students of color signed up in droves, something Shirude said rarely happens in upper-level, college-credit-bearing courses in her school, even though nearly 6 in 10 of Garfield’s students are from racial or ethnic minority groups. Currently, students are using linear and exponential functions and other Algebra 2 and precalculus skills to analyze how a candidates’ fundraising is related to the number of votes they get.

Not all social justice math lessons use high-profile events to create real-world relevance or explore equity questions. For many years, Chicago private school teacher Sylvia Glassco has taught a multi-week unit that asked her middle school students to imagine themselves as recent college graduates trying to manage a budget.

They manipulate formulas in Excel spreadsheets to see how student loan debt or a sudden job loss can shape people’s lives, and they study racial patterns in income. For children of privilege, like her students, the lesson “helps them see life through another person’s eyes,” Glassco said.

Bringing a social justice lens to math isn’t a new idea. Many advocates trace the roots of their thinking to Paulo Freire, whose 1970 book Pedagogy of the Oppressed imagined education as a tool of empowerment. The idea of “critical mathematics,” which imagines math as a tool to critique social and political systems, emerged in the 1980s.

And since the 90s, math education groups have been increasingly advocating real-world and culturally relevant approaches to math that help teachers capitalize on their diverse students’ cultural and intellectual assets and use classroom strategies that include everyone in rich discussion.

Using math to examine societal inequities has long drawn skeptics and opponents, too. Education historian Diane Ravitch warned in a 2005 essay that it would undermine the crucial work of mastering important skills and ideas and set students up to “fall prey to the political designs of their teachers.”

Many teachers emphasized that it’s important that topic ideas come from the students. Glassco sets a few basic parameters for discussion, such as the idea that all citizens deserve a just society and equal access to opportunities, but then asks her students to consult with their families and report back on the issues they’d like to explore.

The children don’t always choose social justice topics. Glassco’s students have studied how the news media depict people of various races and ethnicities, but they also love calculating how many packets of Jell-O it would take to fill the Grand Canyon. It’s important for children to “just do silly kid stuff” with math too, she said.

Some still worry that teachers’ personal and political beliefs could wield too much influence on discussions of social justice. Michael Petrilli, the president of the Thomas B. Fordham Institute, a conservative-leaning research and advocacy group, said he’s “nervous about whether political bias is creeping into these lessons.” He’s also concerned that teachers might spend too much time linking math to civic issues, and not enough helping children master the math they’ll need in later grades.

Hung-Hsi Wu, a professor emeritus of mathematics at the University of California at Berkeley, worries that social justice concerns divert attention from the real problem: that the math that’s currently taught in most classrooms is nothing more than a jumble of imprecise definitions and unrelated ideas.

“Even if teachers do use social justice to get students to learn math, my question is, what kind of math are they learning?” he said.

Andrew Brantlinger considers himself an advocate of social justice instruction, but he’s skeptical that every math topic is a good fit for it. An associate professor of math education at the University of Maryland’s college of education, Brantlinger wrote a 2013 paper detailing his attempts to use the approach with his students, who were taking geometry in night school in Chicago.

He found that connecting math to social issues didn’t help his students learn math, although he concedes that his own inexperience with the approach could have contributed to the problem. He also worries that the social justice approach could perpetuate a two-tiered system: “real-world math” for students of color and those from low-income families, and college-prep math for white, largely affluent students.

Advocates of the social justice approach say the biggest risk is in excluding it from the math classroom.

“There are big issues happening in the world,” Edillon said. “What happens if I can give them something that helps them understand those things and I don’t?”