If you think about video game movies, there’s a good chance Paul W.S. Anderson’s work quickly comes to mind. As the director and/or producer on all six Resident Evil movies, he’s not only made the most successful video game movies of all time, he’s also made a name for himself doing so. He’s not done with Capcom games, though. Up next, Anderson is taking on Monster Hunter, and went to the ends of the Earth, quite literally, to make his next epic. We caught up with the director to learn about how he got Capcom on board, the harsh environments of shooting in Namibia, and the sunburnt eyeballs along the way.

When Anderson talks about Monster Hunter, there’s a palpable excitement in his voice; he often uses words like “wonder” and “amazement” to describe the games. These two feelings are something he brings up as something he’s trying to translate into his movie. On the one hand, this is likely some amount of marketing speak; he’s talking to us to promote his next blockbuster after all. On the other hand, it’s easy to buy that he really feels this strongly about the movie and series, too. When he gets going, he doesn’t really stop, talking about why he loves Monster Hunter and what it’s been like adapting it for the big screen. He packs a lot of info into our 30-minute phone call.

Anderson says he first became aware of Monster Hunter 11 years ago, when a friend in Tokyo suggested he check out the games. “At that point, Monster Hunter was very much, as you probably know, kind of a Japanese-only phenomena; it was relatively unknown outside of Japan, but it was a very big deal within Japan,” Anderson tells Game Informer. “I could immediately see why.” He instantly wanted to make a movie, he says. 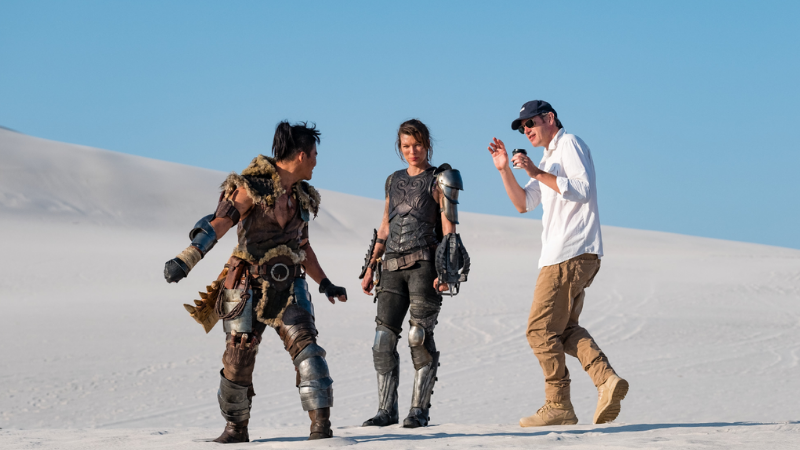 At the time, Anderson was a few films deep into the Resident Evil series, which would go on to be the most successful video game adaptations of all time, bringing in $1.2 billion worldwide. Despite that success, he says developer/publisher Capcom was hesitant about giving him the greenlight for Monster Hunter, and from inception to release, it’s been over a decade in the making; he began pitching Capcom around 2009. The global success of Monster Hunter: World in 2017, though, finally gave Anderson the greenlight he was looking for.

But even compared to Resident Evil, Capcom was very hands-on with Monster Hunter, Anderson says. Numerous times in our interview, he brings up Kaname Fujioka and Ryozo Tsujimoto, director and producer of the Monster Hunter series at Capcom respectively, as being heavily involved with the process – especially when it came to the movie’s monsters. “I would say Fujioka-san and Tsujimoto-san, we were in the driving seat together, sharing the steering wheel,” Anderson says. “Or we had three separate steering wheels.”

“My feeling was if I can please Fujioka-san and Tsujimoto-san and the level of detail and clarity and specificity that they want, if they’re happy, then even the most hardcore fan is going to be happy,” he adds.

The Resident Evil series has been a huge part of Anderson’s life at this point. So is he excited for Resident Evil Village, the next mainline game in the series? “I think I’ve been in the Monster Hunter world for so long, I don’t think I can comment on that,” Anderson says, laughing.

The monsters in Monster Hunter were made using CG, of course; there’s no way around that. For the movie’s world, however, Anderson wanted to shoot on location instead of a studio backlot. But matching the spectacle of the Monster Hunter world proved to be a challenge for him and his team. So they scouted locations around the world, finding dramatic landscapes that closely matched the fantastical landscapes of the game. Most of the film was shot in South Africa, as well as the harsh deserts of Namibia.

As Anderson tells it, the locations the team chose were upwards of 200 miles from the closest civilization. They had to erect tent villages in the middle of the desert for 300 people to live in, pump their own water and run their own electricity. There was the weather to contend with, too. “Nature hadn’t intended for mankind to live there,” Anderson says. “During the days, we’d have temperatures of, like, 50 degrees centigrade. That’s like 120 fahrenheit or something. Like, insane heat. Then during the nighttimes it would drop below freezing.”

The result, again, is that feeling of wonder and amazement Anderson says he got from playing the games. He tried to pick locations that could be as true to the game as possible, even if it was perilous. “We literally went to the ends of the Earth,” he says. 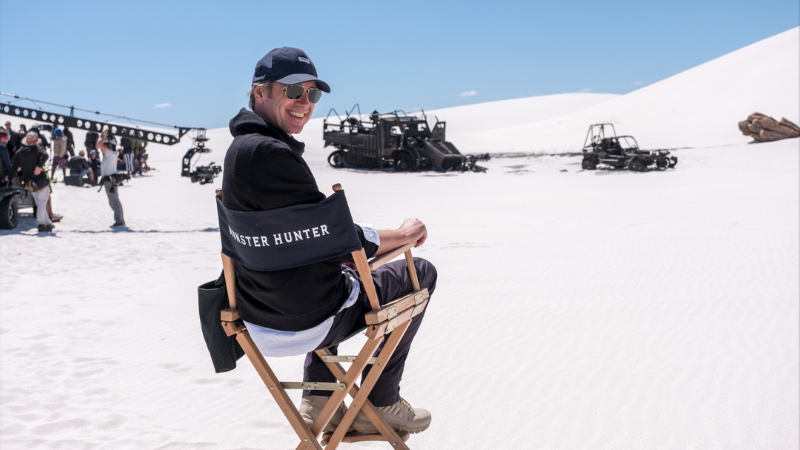 Paul W.S. Anderson on the set of Monster Hunter

There’s a pretty safe argument to be made that Anderson went above and beyond the call for the movie’s environments. That argument could also apply to the movie’s monsters. According to him, creating the CG monsters in Monster Hunter took a year and a half – by design. Anderson says he didn’t want the animators to rush for six months at the end of the project, turning in work that wasn’t their best. So he gave them the time to really craft the movie’s creatures, and he says it paid off.

“Now that the movie is finished, the combination of these real giant landscapes with creatures locked into reality and creatures that have taken over a year to build and to animate with the input of the creators of those creatures from Capcom, the results are stunning,” Anderson says. “I mean, really, this is going to be the best monsters anyone’s ever seen, in my opinion.”

The last time Monster Hunter director Paul W.S. Anderson tackled a Capcom franchise, it ran for six movies and made more than a billion dollars. With Monster Hunter, does he have similar aspirations? According to Anderson, no. He’s taking it one movie at a time. “As soon as you spend more time thinking about what the sequels are going to be than the movie you’re actually making right now, then you don’t put your all into the movie you’re doing right now,” he says. “You look at any franchise, it’s really reliant on one movie after the next. Really, the last two and a half years has been two and a half years of just Monster Hunter 1. And if there’s a Monster Hunter 2, that would be great, I wouldn’t say no. But really our effort has been all-in on this movie.”

If Anderson has a recurring motif in his video game movies, it’s their primary star, Milla Jovovich. The two first started working together on the first Resident Evil, in which she played the movie’s protagonist, Alice, a role she played for 15 years across all six films. She’s also Anderson’s wife. Unsurprisingly, alongside actors like Tip “T.I.” Harris, Ron Perlman, and Tony Jaa, Jovovich stars in Monster Hunter. Nearly 20 years after they first started working together, Anderson calls her a great creative partner, who, even on a movie full of extremes, was willing to go the extra mile for her part.

“If your lead actor’s willing to go to the ends of the Earth to go shoot Monster Hunter,” Anderson says, “live in a tent in alternating subzero and super hot temperatures, put up with dust storms, put up with getting burnt eyeballs, which she did, the whites of her eyes were sunburnt by the time we got to the end of the movie because she was working so much in the hard desert sun. If your lead actress is willing to go that extra nine yards for the movie, then that helps take everyone else over the top as well.”

It’s been a long decade for Anderson trying to make a Monster Hunter movie, but it’s almost here. Monster Hunter will be released in theaters on December 18 in the U.S. And only in theaters, which may raise some eyebrows, considering the ongoing COVID-19 crisis. But in Anderson’s mind, even if it isn’t the most elegant answer, seeing Monster Hunter on a big screen is the way to do it.

“I think – listen, there’s no predicting the future; you just gotta hope for the best,” Anderson says. “You know, it’s a really fun movie, I’m incredibly proud of it. I think it’s the best movie I’ve made and I’m excited for people to finally see it, having worked on it for so long. If anything’s worth going to see in cinema, it’s this, because it was built for the big screen.”

This story originally ran in issue 332 of Game Informer. To buy a copy of the magazine or a subscription, click the link.