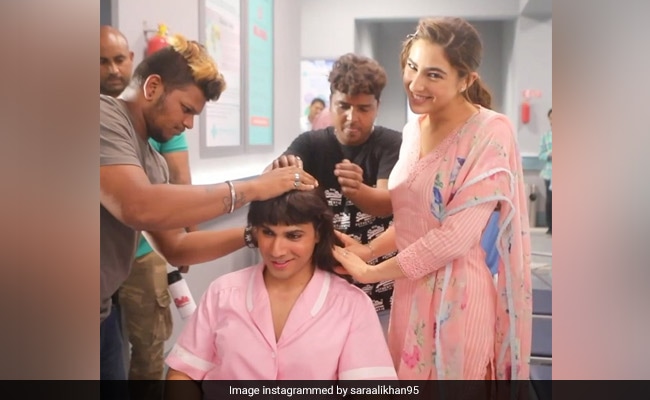 A still from the video. (courtesy: saraalikhan95)

Sara Ali Khan’s latest Instagram post made us take a second look. The 25-year-old actress shared a throwback BTS video from the sets of her upcoming film Coolie No 1 on her Instagram profile on Thursday evening. In the video, Sara can be seen introducing a nurse, who happens to be none other than her co-star Varun Dhawan. In the video, the actor can be seen dressed in a pink outfit, with a wig on his head and some make-up on his face. Sara Ali Khan introduced Varun Dhawan with these words: “Please dekhiye, Varuna Dhawan… In all her glory.” She captioned the post: “Meet the hottest nurse ever – Varuna Dhawan.” Sara’s Instafam flooded the comments section of her post with LOL emojis.

Meanwhile, Varun Dhawan posted a video with co-stars Sara Ali Khan, Shikha Talsania, Paresh Rawal on his Instagram profile on Thursday. In the video, the quartet can be seen talking about working out, early call time for shoots, rehearsing the lines and more. He captioned the posy: “4:30 call time? Really.”

Sara Ali Khan and Varun Dhawan await the release of Coolie No 1 remake, which has been directed by David Dhawan. The film is a remake of the 1995 film of the same name that featured Govinda and Karisma Kapoor in the lead roles. The film is slated to release on OTT platform Amazon Prime Video on Christmas. The film’s song tracks Teri Bhabhi, Husnn Hai Suhana and Mummy Kassam are already trending big time.