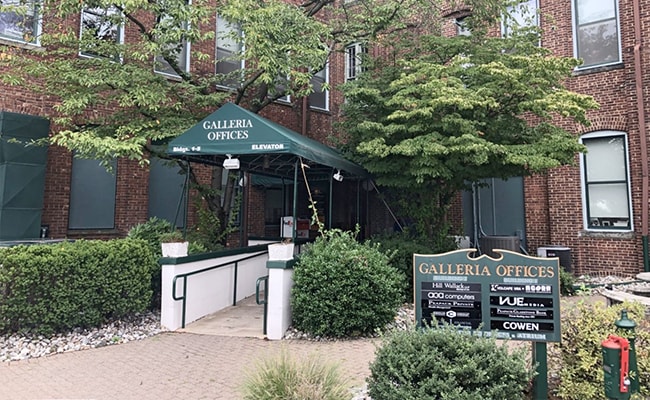 Fifty miles south of midtown Manhattan, in a red-brick building bounded by a railway track, sits a little-known brokerage behind some of the world’s wildest initial public offerings.

From its base in Red Bank, New Jersey, Network 1 Financial Securities Inc. has underwritten six US microcap IPOs this year that surged by an average 2,190% on their first day of trading. 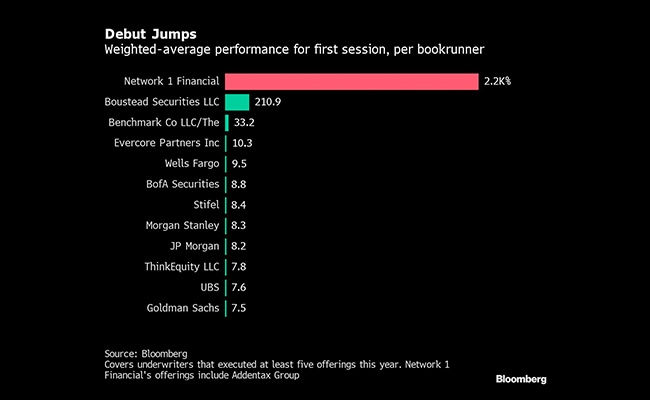 Unfortunately for investors, the downside for Network 1’s listings has proven equally extreme. While still in positive territory, the brokerage’s average offering this year plunged 75% from its peak within a month.

Big moves in tiny stocks are nothing new on Wall Street, but the deals underwritten by Network 1 — which was founded in 1983 and markets itself as a full-service brokerage for sophisticated investors — stand out for consistently outsized swings.

They’re part of a remarkable stretch of gut-wrenching volatility in New York IPOs, mostly by companies from China, that have baffled longtime market observers and drawn the attention of US securities regulators.

In one of the most striking examples underwritten by Network 1, China-based garment maker Addentax Group Corp. soared 13,000% to $656.54 on its August 31 trading debut to briefly become bigger than about a third of S&P 500 Index members.

That’s despite having less than $13 million in revenue for the year ended March. The following day it fell to $30.

The trend is eerily familiar to market participants in Hong Kong, which was a hotbed for mysterious moves in tiny stocks before a regulatory crackdown brought new offerings to a virtual halt.

As small Chinese companies that might otherwise have listed in Hong Kong turn to the US as an alternative, Network 1 has emerged as one of the most active players in this growing corner of the market.

“Investors should definitely err on the side of caution given how a number of these stocks have quickly pulled back 98-99% from their peaks,” said Ken Shih, the Hong Kong-based head of wealth management, Greater China at Saxo Capital Markets HK Ltd, speaking about the wild microcap IPO moves in general.

“What investors should be least comfortable with is the lack of transparency in these stocks to make sense of their unusual meteoric rise in pricing.” 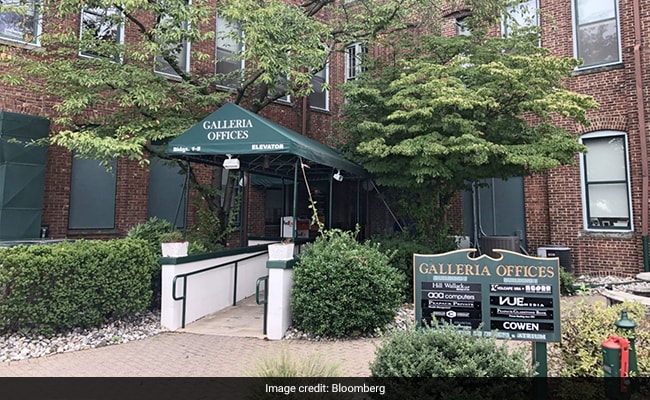 Network 1 did not respond to multiple emails and phone calls asking for comment. When Bloomberg News reporters visited its New Jersey office nobody was available to talk. The company has not been accused of any wrongdoing in regards to the IPOs.

In a recent video on his LinkedIn page, Chairman Damon D. Testaverde said its clients are “high-net worth, sophisticated investors here in the United States and in other countries.”

Network 1 has a history of run-ins with regulators. It has been censured for breaches ranging from a failure to develop written anti-money laundering programs to a lack of policies to detect suspicious transactions and insider trading, according to Financial Industry Regulatory Authority’s records.

In 2007, it agreed to pay a $100,000 fine for soliciting a customer, who was a controlling shareholder of a company, to sell shares in amounts that exceeded regulatory caps, which Network 1 then bought and resold.

Testaverde was suspended for about four months following the decision, according to the Finra report. Testaverde didn’t reply to messages sent via Linkedin or to his company email address.

Another disclosure dated 2020 stated “the firm failed to identify that a customer, a self-identified corporate insider of a microcap issuer, was actively trading the stock of his own company.” The firm was fined $60,000 and required to review its anti-money laundering program.

Its marketing materials say it has conducted private placements for the likes of Grab Holdings Ltd. and Space Exploration Technologies Corp.

A spokesperson for Grab said it had not engaged the company for any transaction, though it was unaware if other parties may have engaged them to participate in investment rounds.

Of Network 1’s 49 deals for stocks that are still trading since 1995, 17 are trading 80% or more below their offer price, according to Bloomberg-compiled data. Seven are in positive territory.

In recent years, the company has built up a specialist Chinese investment banking practice with a dedicated Mandarin-speaking team.

At least 55% of the IPOs underwritten by Network 1 since July 2015 were of firms domiciled in either China or Hong Kong, or that had a majority of their operations in those countries, according to an analysis of transactions listed on Network 1’s website.

One banker at a large Chinese brokerage said Network 1 is well-known among China focused-funds for its focus on microcaps and is often present at industry events.

A US-based banker for a separate big Chinese broker said Network 1 focused on smaller Chinese and Hong Kong companies that don’t meet listing requirements for their home markets. Both asked not to be identified talking about client matters.

This year four out of Network 1’s six listings — the others were a SPAC and a Malaysian payment provider — were either domiciled in Hong Kong or China or have their main revenue streams from China.

All of these offerings had a low float and sometimes a large stake held by insiders. For instance, Magic Empire’s chairman and chief executive officer hold a combined 63% of its shares. None of the companies replied to emailed requests for comment.

Among Network 1’s apparent indirect owners is Shawn Huang Shanchun, the chief executive of a blockchain-based e-commerce company Future Fintech Group Inc. from China who identified himself as the executive vice-chairman of the US broker in a Chinese-language book he wrote.

That position is not listed on Network 1’s website or in regulatory filings. According to the Finra filing, Huang holds undetermined stakes through the underwriter’s parent company.

The author of four books on capital markets, Huang is a graduate of news collection and editing, Future Fintech said at the time of his appointment.

A Xi’an, China-based public relations officer for Future Fintech declined to comment on its CEO’s behalf. There was no reply to a subsequent email to the company’s UK office.

While Network 1 this year has brought more Chinese microcaps to the US market than any other broker, it’s not the only operator in this market segment.

Even though bigger Chinese deals in the US have evaporated as the two countries negotiate an agreement allowing American inspectors to examine audits of Chinese businesses, the US is still an attractive option for small companies.

Unlike Hong Kong where approvals are required to go public, the US operates under a disclosure-based system, where there’s no permission needed.

“Before the door fully closes, investors and institutions, especially those with a high-risk appetite, are trying to squeeze into the market as opportunities may evaporate anytime,” she said.

Some of these other deals run by other brokers have also seen eye-popping increases.

For example, Hong Kong-based financial services firm AMTD Digital Inc., whose IPO was underwritten by a related entity, was bigger than Goldman Sachs by market value at close on August 2. 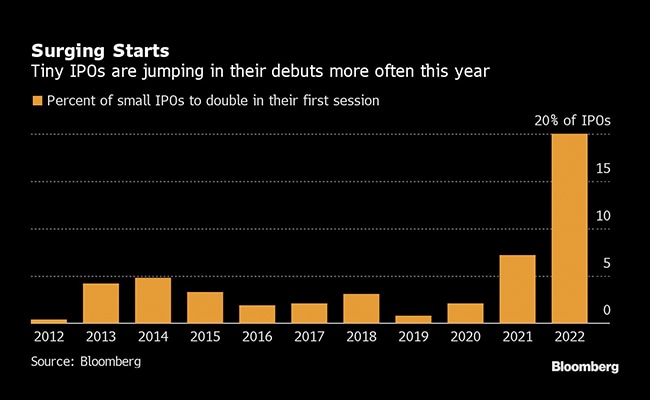 While the string of first-day pops illustrate the reach of this year’s unusual price action, it’s sometimes just the start of the wild price swings.

AMTD Digital, for example, is continuing to experience sessions with extreme price spikes in the weeks after its debut. On Wednesday, shares surged as much as 204%.

Such huge price swings could be related to low liquidity, Justin Tang, head of Asian research at United First Partners in Singapore, especially when companies have made sure to leave something on the table for subscribers to IPOs.

“Big moves happen when other investors want in on the move and yet cannot get enough supply,” Tang said. “The same supply-demand imbalance shows up when investors want to cash out, yet there are insufficient buyers at a certain price.”

The US Securities and Exchange Commission in August said it is monitoring the unusual moves in microcap IPOs without naming any firms. The SEC declined to comment on whether it is assessing any of the Network 1 deals.

“These are scary stocks,” Erik Gordon, professor at the University of Michigan’s Ross School of Business in Ann Arbor, Michigan, told Bloomberg last week, speaking about small IPO stocks in general. “Professionals won’t get near them they’re so scary. It’s easy to get those big price spikes, but they’re not sustainable.”